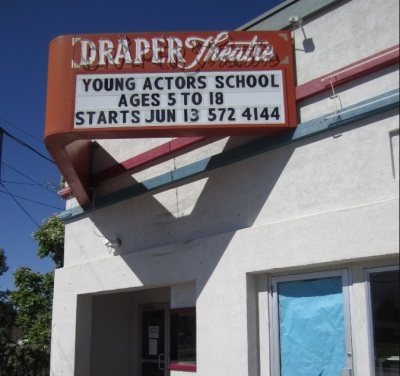 The 277-seat Pearl Theatre was built in 1938 by the Howell family and named after the matriarch of the family and a daughter-in-law. The theatre was a family operation and also featured a doctor’s office in the front section of the building.

In the early days, some live entertainment took place on a small stage. A bag of groceries was given away every Friday night. The theatre was a happening place in this (formerly) small rural community.

The theatre passed through several hands and was destroyed by an arson fire in January 1951. It was rebuilt and reopened as the Draper Theatre.

Educators Charles and Vanessa Nelson purchased the theatre in the late-1980’s and later converted the stage to accommodate live performances.

Draper Historic Theatre (DHT) is now operated by a non-profit board created to carry on the vision of Charles and Vanessa - to produce high quality, family oriented musicals and plays, and to nurture the individual in the process.

In early-2002, Draper Theatre could no longer endure the competition from newly built "megaplexes" and ceased showing films.

Phase One of the theatre’s rehabilitation was underway by the mid-2000’s - roof replacement and seismic reinforcement. A large fund-raising effort was launched to accomplish full renovation and the construction of dressing/rehearsal facilities for cast members.

When The Draper was a movie theatre it seated 264 people.

Here is an article about the fire in January 1951:
http://tinyurl.com/yesr48w

Boxoffice, Jan. 20, 1951: “DRAPER, UTAH - A fire of unknown origin swept through the Draper Theatre building early Tuesday and left the structure a complete loss. Besides the theatre, the building housed a drug store and doctor’s office. The entire operation was managed by Lloyd Iams, who had not totaled an estimate of losses. The 277-seat showhouse was beyond saving when fire apparatus reached the scene, according to firemen.”