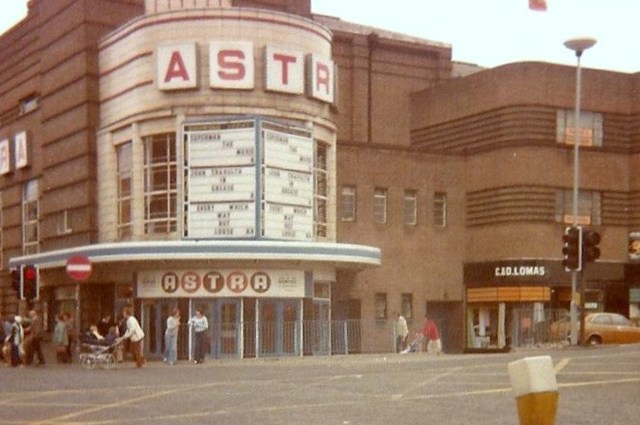 An original Odeon Theatre, built for the Oscar Deutsch Odeon Theatres Ltd. chain. It is located on the corner of Brighton Road and High Street in the centre of the north Wales seaside town of Rhyl, next to the railway station. The Odeon opened on 30th October 1937 with Flora Robson in "Farewell Again".

Designed by Robert Bullivant from the office of the Harry Weedon Partnership, it was a stylish Art Deco styled building. The corner entrance rotunda was lower than the rest of the building and was faced with cream faiance tiles, broken with windows. Behind this was a tower-like feature which contained the main foyer. Seating in the auditorium was provided for 862 in the stalls and 546 in the circle. On each side of the proscenium opening there were large panelled decorative grilles on the splay walls. Lighting in the auditorium was provided by concealed lighting in troughs across the ceiling.

From the 13th October 1969 it was taken over by the Hutchinson Leisure Group and re-named Astra Cinema. They triplexed the cinema from 24th April 1972 with seating for 750 in the former stalls and two mini screens seating 250 and 225 in the former circle. Later, the stalls screen was converted into a bingo club, whilst the two mini cinemas continued on film.

In the late-1980’s the building was taken over by Apollo Leisure UK Ltd. and it was re-named Apollo Cinema. The two mini cinemas were closed in October 1995 and the building was de-tripled into one space again, becoming the Apollo Bingo Club, which remains open today.

The original Company was Odeon Cinema(Rhyl) Ltd., Incorpoated in Birmingham Offices in Temple Street. Every Odeon Cinema was a Seperate Company and shareholders up to max 50 in totaL

Follow this to get the first of 7 photos taken recently, then just scroll through them. http://www.flickr.com/photos/78860621@N02/9049196448/ I walked all round the building and captured just about everything from the outside.