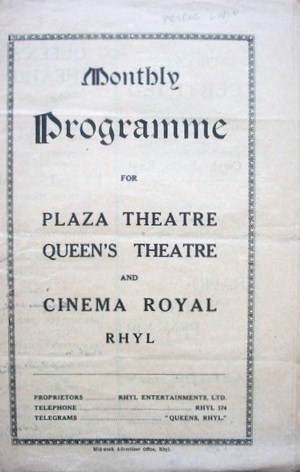 This was the first purpose built cinema in Rhyl, being erected on the site of the back gardens of two bed and breakfast establishments on the corner of the High Street and the Promenade for Messrs Ll. and R. Edwards. It opened on the 27th May 1926 with 710 plush, tip up seats and discreet wall lighting with continuous programmes from 6pm and daily matinees. Programmes changed twice per week and prices were from 8d to 1/6d. The first programme was the double bill of "Policy" and "The Bat".

Around 1927 Rhyl Entertainments Ltd. gained control with the Edward Brothers joining the board of directors. A full augmented orchestra was then installed to acompany the films in place of the trio or solo accompanist employed formerly.

Western Electric sound was installed to see the venue into the sound era, but the cinema was closed on the 4th February 1939, a year after Rhyl Entertainments opened the Regal Cinema and deemed the Cinema Royale redundant for their purposes.

Woolworths quickly brought the site and converted it into a store. They soon demolished the building to build a larger store which was closed in 2009. It is now a BM store.

Woolworths used the Cinema part for a period.. Until knocking it down to build the New Woolworths in the late fifties Which has since become a BM Store