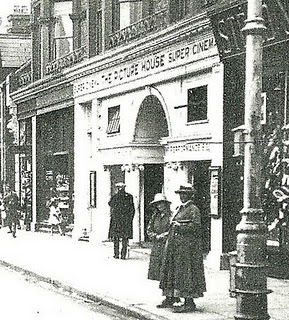 The site was occupied by Messrs Fell’s Bazaar up until they moved to the Old Market Hall in 1910. It was then revamped into a 450 seater cinema by the owner Harry Kirk. It opened as the Picturedrome (known locally as Kirk’s) on the 22nd May 1911, with prices of 3d, 4d, 6d and 1/-.
In 1917 Mr J.R. Saronie, already involved in cinemas in Bangor and other places, took over the lease with resident manager Mr. D.A. Mays and began running three shows per night with three changes of programme per week.

He was followed in 1921 by Messrs Pountain and Barlow, and the venue underwent three changes of name in a single year - surely a record for a cinema - being known as the Picture House Super Cinema, the Picture House and the City Picture House when it was closed on the 9th July 1921.

Still under Messrs Pountain and Baldwin the venue opened again several times, latterly under the name City Super Cinema at prices of 6d to 1/-. The changes of name did not improve its fortunes however and it finally closed at the end of 1924, becoming an arcade until leased by the Inland Revenue as a tax office with shops below. In these hands it remains.

The Cinema was in High Street…. approx 40 yds to junction “The Plaza Cinema was built..