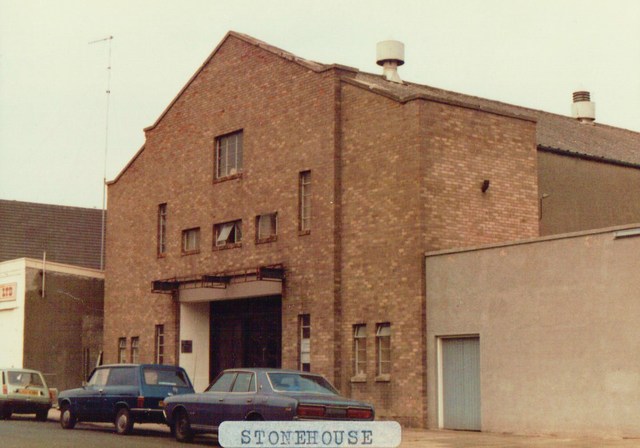 Located in the small town of Stonehouse, southeast of Glasgow. Externally the Rex Cinema was never a beautiful building. When operating as a cinema, it had a small vertical sign with the name in neon letters. There was a slim canopy and several sets of windows which broke up the plain unadorned white stucco facade. Today, the stucco has been removed to reveal plain brick, the marquee is gone as has the vertical sign.

The Rex Cinema was a project of the independent owner/operator John Sheeran, who was a travelling showman with local fairground amusements. It opened on 22nd January 1937 and was officially opened by Scottish performer Harry Lauder, the Rex was hailed as ‘Lanarkshire’s King of Picture Houses’.

What certainly makes the Rex Cinema special, is its interior which dates from 1913. It was originally installed on the Atlantic Ocean liner ‘Homeric’ which was built in 1913 as the ‘Columbus’ for the North-German Steamship Co., but due to the First World War, was never completed. After the war it was taken over by the White Star Line and completed, becoming a replacement to the ‘Britannic’ (a sister of the ‘Titanic’) which had been sunk in the Mediterranean. However, the Homeric proved to be to small and too slow for the task of crossing the Atlantic and was sent for scrap in 1936.

John Sheeran heard of the fixtures and fittings from the liner that were laying in a scrapyard in Inverkeithing. He purchased the entire First Class Lounge of the former liner and transfered it by train (in pieces) to his Rex Cinema which was under construction. It was re-assembled to create the interior of the auditorium. There are original chandelier light fittings, a delicately embossed ceiling and ornate mahogany panels and a mahogany staircase. Seating was provided in stalls and circle. The proscenium has three columns set in an alcove on each side.

The Rex Cinema closed in the mid-1960’s and became an independent bingo club for a while. Later, still in the ownership of the Sheeran family, it became a storage facility for their amusement arcade machines. It retains all fixtures and fittings, including the silk stage curtains, seating in the circle and the projectors in the operating box.

On the 9th August 2005, Historic Scotland designated the Rex Cinema as a Grade B Listed building.