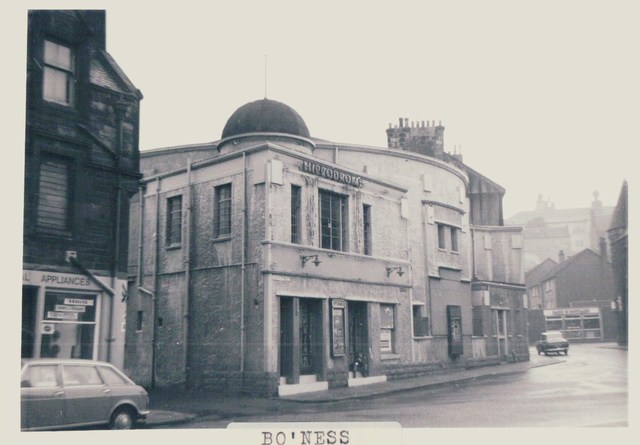 The correct name of this town is Burrowstouness, but it is always refered to as Bo'ness. The Hippodrome Cinema opened on 11th March 1912. It was built for local showman Louis Dickson.

There is a small dome on top of the entrance portion of the building. Inside the auditorium the space is circular, which gives it a ‘circus’ feel. There is a small balcony which is supported on cast iron pillars. The proscenium is 25 feet wide and two dressing rooms were provided.

Over the years some alterations have been made to the building to bring it up to modern standards, in March 1926 the original architect Matthew Steele was engaged to re-arrange the roof. In March 1930 architect John Taylor was employed to make alterations to the balcony and by 1947 Caledonian Associated Cinemas were operating the Hippodrome Cinema and they employed their own architect Alexander Cattanach Jr. to up-date the building.

The Hippodrome Cinema closed in the early 1970’s and was converted into an independent bingo club, which continued until around 1980. The building was empty and unused for almost 30-years. Projectors were still in the projection box and the building was basically a ‘time-warp’.

In September 2006 over 502,000 GB Pounds was secured from the Heritage Lottery Fund to assist in the restoration of the Hippodrome Cinema. It re-opened to the public on 9th April 2009, and the cinema now contains a bar and a cafe.

On 1st June 1979, Historic Scotland designated the Hippodrome Cinema a Grade A Listed building. It had been placed on the Buildings At Risk Register since 1994.

The building was handed over to Falkirk Council by the contractors on Feb 14th 2008. A gallery of photographs from that day showing the almost finished interior can be found on the following page, as well as a gallery from just prior to the works starting:

It is anticipated that the building will reopen as a cinema later in 2008 – a rare conservation success story in the cinema world!

The latest news from the BBC on the Hippodrome Cinema:
View link