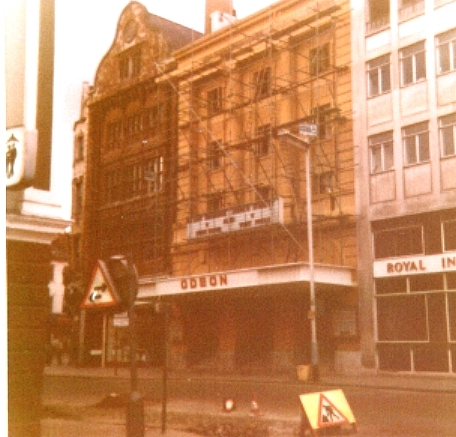 Built as a Corn Exchange, it opened on 29th March 1851, and was designed by architects G. Alexander and W. Hull. It had a barrel vaulted wooden ceiling and was used as a public hall for dances and meetings as well as for farming auctions. A grand organ made by Schultz was installed, and in 1872 another organ was installed. Travelling film shows began to use the Corn Exchange from 1900.

It opened as a full time cinema named The Exchange Cinema, on 2nd August 1920, with seating provided for 2,020 in stalls and balcony. A Compton 3Manual/33Rank concert organ was installed.

In 1924 it was taken over by Provincial Cinematograph Theatres(PCT) and they added lifts to the upper sections of the building, a roof garden and tea room. From February 1929 PCT were taken over by Gaumont British Theatres chain. On 12th August 1929, The Exchange Cinema became the first outside of London to screen the Al Jolson ‘talkie’ “The Singing Fool”. The Compton concert organ was sold and replaced in 1935 by a Wurlitzer 2Manual/8Rank theatre organ which came from the Picture House, Leicester. It was opened by organist Frank Slater.

The Exchange Cinema was re-named Gaumont from 10th April 1950. The cinema was refurbished in 1951 and the restaurant was still open, but the roof garden had been closed for many years. The Wurlitzer organ was sold and removed from the building in 1957.

From 16th March 1964 it was re-named Odeon and was closed by the Rank Organisation on 7th September 1974. The building became a Top Rank Bingo Club and was sold to an independent bingo operator in 1977. In November 1997 it was transformed into a Chicago Rock Cafe.

The former Corn Exhange is a Grade II Listed building.