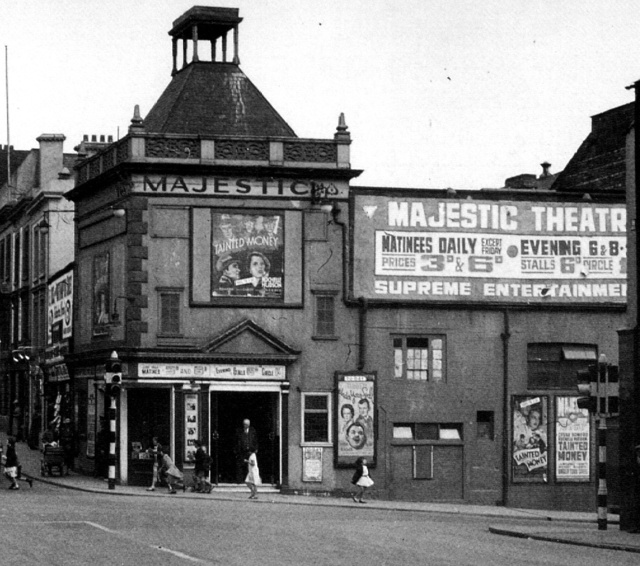 A place of entertainment stood on this site from 1863 when Mr William Thomas demolished part of The Crow Inn to erect a hall which, he claimed, could accommodate 800 patrons and contained 500 jets of gas for illumination. Functioning as Music Hall and Theatre of Varieties (Charlie Chaplin performed here as a member of Fred Karno’s Army and Jack Johnson boxed exhibition rounds), the early part of its history is covered in depth in the excellent Arthur Lloyd site.

In 1912, the New Theatre opened on Abington Street and the Palace gave up variety to become a full-time cinema, opening as the Picture House on Boxing Day 1912, with 778 seats and a proscenium width of 19 feet. Competing with the County Electric Pavilion opposite, early publicity offered books of tickets at reduced prices: 25 1s tickets for £1, whilst the manager invited customers to “Have your letters addressed here where they will be kept waiting for you: ladies will find it convenient to have their parcels sent to them c/o The Picture House. Cycles and prams kept undercover for patrons free of charge". Clearly this wasn’t enough and The Picture House went bankrupt after a few months.

Enter Leon Vint and the theatre re-opened on 22nd September 1913 as Vint’s Palace (films and variety). By 1919 Vint had gone and the Palace reopened as the Majestic Cinema (Prop: Northampton Cinema Co, manager Frank McLintock, formerly of the Cinema de-Luxe). A. Grahame was Manager by 1922 when programming was continuous with 2 changes weekly and prices from 5d to 1s 3d. Another change in 1927 saw H. G. Hadland as Manager.

Associated British Cinemas(ABC) took over the Majestic Cinema on 2nd March 1931. BTH projectors, arcs and sound were installed and the hall was booked at Head Office: 30-31 Golden Square London. Showings were twice nightly, matinees every day except Friday and 2 changes weekly. The Majestic Cinema closed on 26th June 1937 for the opening of the new Savoy Cinema on Abington Square. Standing derelict, demolition did not come until 1950, when the site was absorbed into the premises of Bells. Nowadays nothing remains, the site is occupied by a mobile phone showroom.