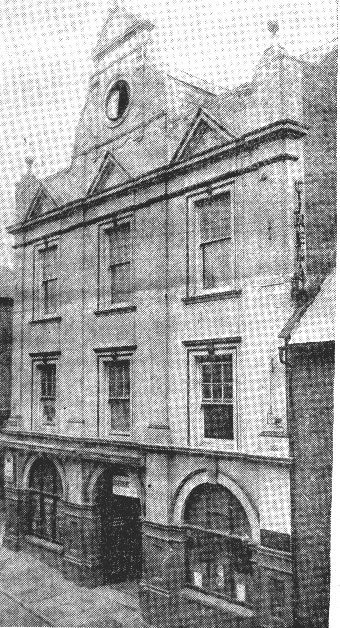 The Temperance Movement registered its presence in Northampton in 1887 with the construction of a hall at the junction of Newlands and Princess Street, close to the site of the cemetery of the medieval Greyfriars Monastery. ‘The Comprehensive Gazetteer of England and Wales 1894-5’ referred to it as “…a building of brick in the style of the Renaissance…”. Newland was a thoroughfare leading from the impressive Market Square and also contained a Gothic-looking Masonic Hall. In February 1894 a debate on socialism between Henry Labouchere, M.P. for Northampton, and H.M. Hyndman took place. Later, moving pictures were shown, with the first performance in 1896. Poole’s and West’s Dioramas became a popular feature at this central location, not far from the large Corn Exchange, which would not succumb to the movies until 1920.

1919 saw the property known as Temperance Hall Picture Palace with Sydney J. Flateau as manager. Still in charge in 1922 he was providing 2 shows nightly, daily matinees with 2 changes weekly, for prices ranging between 5d to 1s. For an extra 3d, patrons could enter half an hour before the programme ‘to listen to a pleasing orchestra’.

The local paper reported on the Temp’s range of sound effects: a drum filled with pebbles and shaken for sea sounds, half-coconut shells for horses’ hooves, sandpaper blocks rubbed together for train noises and rolled up newspapers slammed on a slab to represent shots. Over the years, contemporary accounts painted a picture of a fairly spartan cinema experience, characterised by the smell of the toilets upon entry, before experiencing a programme of ‘B’ movies, admittedly more cheaply than the nearby first-run houses (The Gaumont/Odeon on the Market Square and the Savoy/ABC on Abington Street). Staff members were, apparently, none too diligent at enforcing age-restrictions so it would not be uncommon to find a horde of under-16s there on a Saturday night!

The 1931 Kinematograph Year Book recorded the cinema as Temperance Hall Cinema Ltd., with prices from 3d to 1s 3d and disc sound. By 1934 a Kamm sound was installed and prices had risen to between 5d and 1s 2d. The 1954 KYB records the same sound system and this accords with some local accounts suggesting that films there sounded distinctly muffled.

By 1941 the proprietors were the Temperance Hall Cinema Co. and the hall, with 642 seats, was booked at London and Birmingham. Programming was continuous with nightly shows and matinees on Friday and Saturday with prices from 5d to 1s 2d.

In 1958, with admission prices at 9d, the Temp celebrated its 50th Anniversary as a cinema by showing an original slide: ‘Ladies will please oblige by removing their hats'. Films continued for another five years, but closure as a cinema came on 2nd September 1963. After some months dark, the premises reopened as Zetters Bingo & Social Club before final closure in 1972.

The tenure of Northampton Development Corporation was characterised by its indecent haste to tear down any buildings of character within the town. Although run down, the Temp was not beyond redemption but was sacrificed for the monstrous Grosvenor Centre shopping development. The ‘Chronicle & Echo’ published a photograph of the wrecking ball finishing off the Temp in May 1973 to record what had been one of the country’s earliest full-time cinemas. Princess Walk and Newlands walk remain as named passageways within the shopping mall to leave a reminder of this vanished location.

(Northamptonshire Records Office holds Watch Committee Minutes (covering licences under the 1909 Cinematograph Act) for the Temperance Hall for the period 1949-57.)