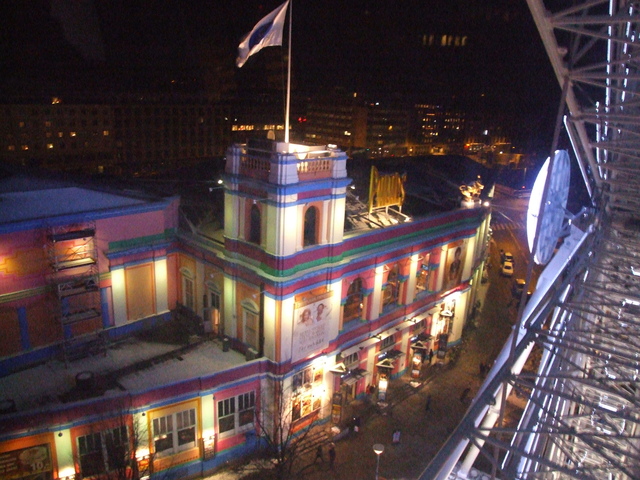 The original Palads Bio (Palace Cinema) was constructed in the old Hovedbanegard (Central Railway Station) opening on 17th October 1912 with 3,000 seats, making it Europe’s largest cinema at that time. It was so successful that it was closed on 15th April 1916, and demolished in 1917 to enable the present Palads Bio to be constructed.

Opened on 26th January 1918 with “Mountain Ejvind and his Wife”. It had a seating capacity of 1,790 seats and was designed by architects A. Clemmensen and J. Nielsen. The new Palads Bio also contained a restaurant and a ballroom and was located next to a newly built entertainment complex, and all buildings were designed in a Neo-Classical style which was popular at that time.

The Palads Bio was always a popular city centre cinema and it was closed for modernisation in June 1955, re-opening on 19th August 1955. It had been completely modernised to the designs of architect Holger Row, with the seating capacity reduced to 1,519 and CinemaScope was installed. In June 1978, when operated by the Nordisk Film chain, the cinema and surrounding spaces in other buildings, including the former ballroom, were sub-divided into 12 smaller screens. The largest screen seating 818, took up a greater portion of the original auditorium and still retains seating in orchestra and balcony levels. A year later the Palads Bio became a 20 screen complex, with the remainder of the screens being located in the vast basement, the smallest screen having a seating capacity of 40. The total seating capacity had now increased to 2,181. There is a further complicated history of the cinema in recent years with screens being moved, closed and then re-opened.

The entrance foyer is mainly intact, and has survived changes over the years. The exterior has become a landmark in the city with its garish rainbow coloured paint scheme.

La Passion de Jeanne d'Arc (1928) premiered in the Palads Bio on April 21, 1928. The owner at that time was also a well-known critic, and while recognizing Passion as a great film, claimed it could not appeal to the larger public. A social-democratic politician publicly challenged the Palads Bio owner, and in response, the cinema opened its doors to a free matinee for the city’s workers — 1800 watched the Passion. They were given response cards, on which they gave an overwhelmingly positive reaction. This is detailed in the excellent commentary on the Criterion DVD of Passion.