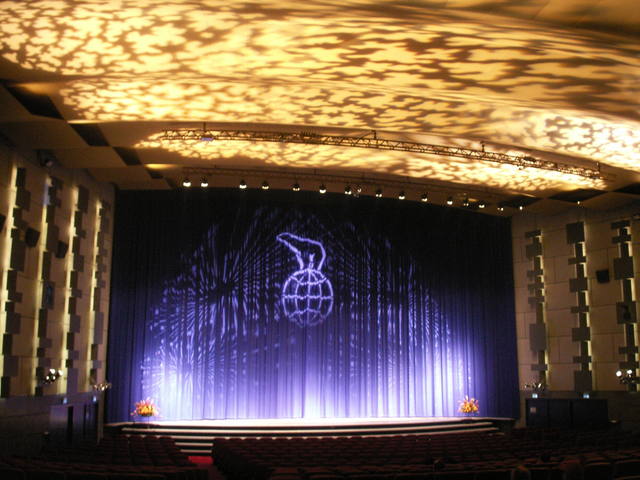 Opened on 3rd November 1961, the Imperial Biografen is located in the middle of a large office block and hotel complex in the centre of Copenhagen (a new National Theatre was also part of the plan, but was never built). It is operated by the Nordisk Film cinema chain.

Designed by architects Otto Frankild, assisted by Jorgen Hoj and Svend Aage Hansen. There is spacious outer foyer containing the ticket office and an extremely large two level main inner foyer which contains a café on the ground floor and a licenced bar on the first floor. All seating is provided on one stepped floor and originally, when first opened, the capacity was for 1,521. The cinema is equipped to screen 70mm film. In September 2013 the old screen of 15.7 meters(52 feet wide) x 7.3 meters, was replaced by a new screen 18/4 meters wide(62 feet) x 7.7 meters. The new screen is in front of the original position, so no curtain is used. The Imperial Bio is always technically maintained with the latest equipment installed which currently includes Dolby Atmos surround sound, and is THX certified. Occasional live performances are held in the auditorium.

The reduced 1,004-seat capacity was due to larger seats recently installed with more legroom. It is the ‘premiere’ cinema of Copenhagen, although sadly in recent years has lost some of its audience to a new multiplex cinema at Fisketorvet. In March 2021 it was branded as a THX Ultima cinema. The seating capacity is currently 998-seats

The Imperial Biografen has announced a 5-day 70mm Film Festival to take place 26 – 30 April 2009. All films will be in their original English language and are:
“Out of Africa"
"Titanic"
"Hello Dolly"
"The Abyss"
"Fame"
"Poltergeist"
Further details here:
View link

Exterior and lobby photos from July 2008.