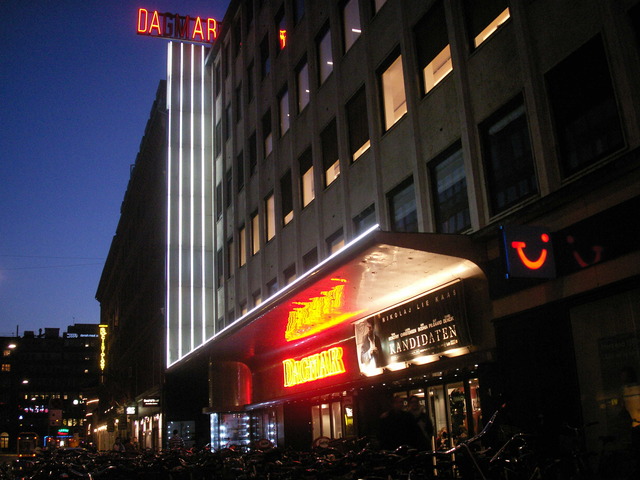 The Dagmar Teatret replaced the Dagmar Teater of 1883, which burnt down in 1937. It opened on 15th March 1939 with 808 seats, located within a new office building named Dagmar House in Copenhagen’s city centre. The opening film was Leslie Howard and Wendy Hiller in "Pygmalion".

Designed by the architectural firm Allen Christensen & Co., seating was provided in orchestra and balcony levels, with two loge boxes on each side. The orchestra seating was just below street level with the balcony at street level. There were two relief panels by noted artist Olaf Staehr Nielsen, depicting a female nude on each side of the proscenium opening.

The cinema was built for promotor Hilmar Clausen, and was considered to be upmarket and luxurious.

During World War II, the surrounding office building was occupied by the Gestapo and the cinema was seized, to became a ‘soldiers’ cinema for the use of the occupying forces and was re-named Weltmacht Kino. After the German’s surrendered in 1945, the cinema was returned to its original owner. There was so much damage done to the auditorium by the troops who had ‘shot its plasterwork to pieces whilst watching films’, that it had to be rebuilt.

In 1974 the Dagmar Teatret was converted into a four-screen cinema. Seating in the orchestra level is now 500, the balcony was divided into two screens, each seating 76 and a fourth screen seating 45 was created in what had originally been a cloakroom. In 1990 a 90-seat fifth screen was added, located behind the screen of Screen 1.

The Foyer remains little altered and contains a cafe area. Externally, the patriotic red and white neon still shines out at night.

I can add that the original theatre was modelled on the royal theatre of Copenhagen (on a much smaller scale) and by the same architects. The building was originally a hotel, named after Princess Dagmar (later czarina Maria Feodorovna of Russia). Legendary director Carl Th. Dreyer managed the cinema from 1952 through the late sixties.

The Dagmar is not a great beauty anymore, but it was still my favorite theatre when I lived in Copenhagen, due to its intimate cafÃ© atmosphere and a pleasant blend of indie and the best of studio films.

Photographs of the Dagmar, from July 2008.