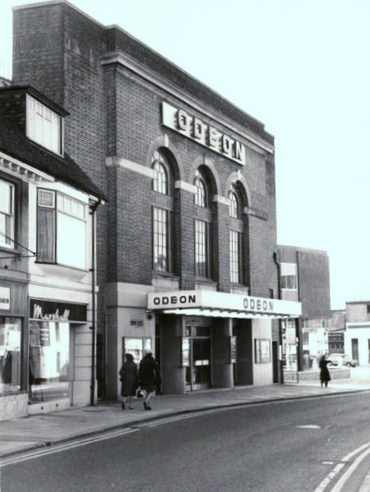 Built for independent operators Cohen & Rafer, the Majestic Cinema opened on 22nd August 1936 with Jack Buchanan & Fay Wray in "When Knights Were Bold" & Ellisa Landi in “Koenigsmark. The façade has large, decorative arched windows which allowed daylight into the circle lounge which contained a café. Seating was provided for 1,600, with 1,100 in the stalls and 500 in the circle.

It was taken over by the Oscar Deutsch Odeon Theatres Ltd. chain in 1943 and was re-named Odeon on 7th July 1945. It was converted by the Rank Organisation into a triple screen cinema (their 2nd such conversion) from 24th December 1972 with 457 seats in the former circle and two screens in the former rear stalls area seating 102 & 106. Two new projection rooms were constructed downstairs.

Taken over by the independent Brent Walker chain from 26th October 1975 it was re-named Focus Cinema (even though the Odeon sign remained on the front of the building for many months, possibly until Easter 1976!). It was again taken over by an independent operator from 31st October 1982 and it was re-named Ace Cinema. Ace 1 was closed as a full time cinema on 28th September 1983 for conversion into a live theatre. This reopened on 18th December 1983 in a temporary form before a long conversion period. Films were only shown on a few occasions (blockbusters), but cannot be shown now. Films carried on in the cinemas below as Ace 1 & 2 for a number of years.

The local council took control in June 1985 and it was re-named Stag Theatre, using the upstairs screen for live show use. Refurbishment in 1992/1993 saw the Plaza Suite added at the end of the building (the Plaza name was for a previous cinema in the town). The two downstairs cinemas were named Majestic 1 & 2 for a while. The café/bar was named the Carlton after another former cinema in the town. In 2004 it was re-named Playhouse Theatre.

The Playhouse was closed on 7th July 2006, but was re-opened two months later under new management. It was taken over by Kino Holdings who operate the nearby Kino Cinema, Hawkhurst. In February 2007, they were granted a 25-year lease to operate the building and the name reverted back to Stag Theatre, with the cinemas known as Kino. Due to financial problems, it was closed in July 2008. It was re-opened in 2009.

Are you sure about the date of Odeon to Focus changeover? A friend of mine worked as a part time projectionist here in 1975/6, and I’m fairly sure it still displayed Odeon signage at that time.

In December,2014 Sevenoaks Town Council, who lease the Stag has the building designated an Asset of Community Value under the localism Act, 2011.The aim is to protect the former Odeon from failing under bad management and being lost to the town