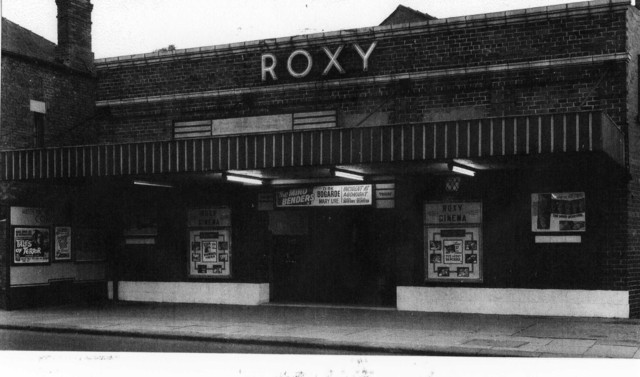 Located in Swinton, south Yorkshire. The Roxy Cinema opened as the Picture House on 15th July 1929 with Jean Hersholt in “Battle of the Sexes”. It had a stadium style auditorium with raised seating at the rear which it called the circle that had almost 200 seats. The total seating capacity was for 904. It was built by the local firm of Thomas Wade & Sons who also built the cinema at Wath on Dearne close by and the Regal Cinema in Rotherham (Later the Odeon/Scala). The Picture House was designed by Barnsley based architect Percy Archibald Hinchcliffe and externally was a rather plain building. It was equipped with the last Clavorchestra Organ ever built by Brindley & Foster of Sheffield. It was a 2 Manual, 19 Rank instrument that had a console made of Honduras mahogany and was opened by Frank Ratcliffe.

The cinema later passed to the Mexborough Theatre Circuit and after redecoration reopened as the Roxy Cinema on 2nd August 1937. In late-1954 it became part of the Star Group of Cinemas and Cinemascope was installed in June 1955, with Edmund Purdom in “The Student Prince” being the first film shown here in that process.

Bingo was introduced on one night a week, on Sundays, from July 1961, then went full time Star Bingo but surprisingly was one of the few cinemas where full time cinema returned and for a time the programmes would play Mon-Wed in Swinton, then transfer to its sister cinema the Majestic in Mexborough (the next town on) and play there Thurs - Sat, with Mexborough’s Mon - Wed programme moving to Swinton. A big picture would play 6 days at both cinemas with separate Sunday programmes.

The Roxy Cinema closed suddenly on Saturday 3rd April 1965 with John Wayne in “The Magnificent Showman” (aka “Circus World”) even though future attractions were still being advertised. The cinema was then put into ‘mothballs’ with Star Cinemas stating that they hoped it would re-open at a later date when film going became more popular again. It was safely secured but never did re-open as a cinema.

After several years in a boarded up state it became a skateboard centre, then when that craze began to wane it was converted into a squash club. It is still open and known as Cafe Sport.

For the record, Mario Lanza was not in ‘The Student Prince’, only his voice was heard dubbed for Edmund Purdom who starred in the title role.

Although known as Café Sport, the building is actually home to two gyms, two function rooms and a bar. When I visited in May 2016 it was up for sale.