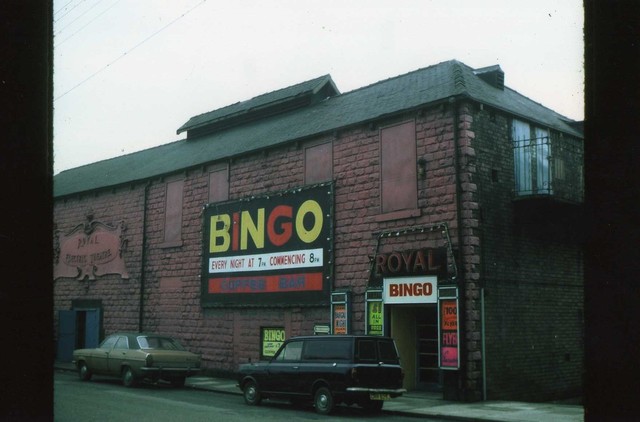 The Royal Electric Theatre opened on 28th May 1911 on the site of the old police station. Seating 850 with dark gold tip-up seats in the balcony and red morocco seats in the stalls, the cinema had a decent sized stage and three dressing rooms, with a beautifully decorated proscenium arch. The architects were the local firm of George White & Sons and G.H.Smith & Son of Mexborough were the contractors. In 1912 it was taken over by Photoplays and closed for redecoration in 1913 and again in 1928 when the new proprietor and manager was Mr Goodacre. In 1940 it was re-named The New Royal Electric Theatre.

By the 1950’s it was known simply as the Royal Cinema and a Cinemascope screen was installed in 1955, with its first Cinemascope film shown being Rober Taylor in “Knights of The Round Table” opening on 24th January. In 1958 it was taken over by P. H. Blake Ltd. with Sunday bingo sessions being introduced in August 1961.

The Royal Cinema closed on 2nd June 1962 with Steve Reeves in “Morgan The Pirate” and Anthony Hall in “Atlantis, the Lost Continent”. It immediately opened the next day as the Royal Casino, advertising bingo at 7.30pm and roulette at 9.30pm. Bingo continued until the early-1980’s, when that ceased and the building was left to decay with threat of demolition.

However, in 1990 the building was purchased and turned into a restaurant on three floors with licensed bar and conference facilities and is still open as a Chinese Restaurant today.

Interestingly enough, it is still called the Royal Electric Theatre. To the left of the front facade is a stone inscription, left over from its cinema days, giving the name of the theatre.