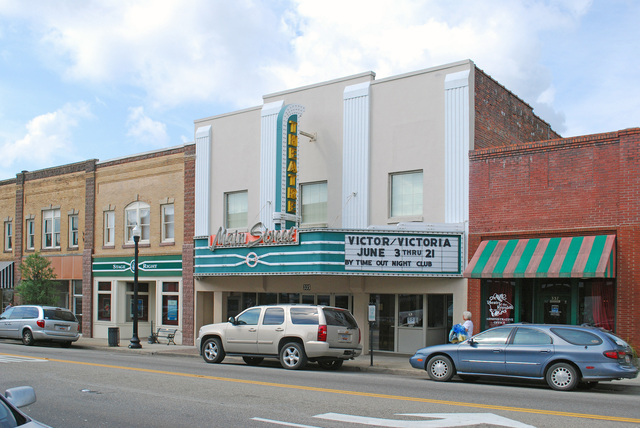 Here’s an article about a fund raiser for the Main Street Theater. which confirms the information in he entries above. This theater’s entry indeed needs updating.
http://www.thesunnews.com/123/story/1118037.html

The correct current name should be the Main Street Theater. Theater of the Republic is the name of the community theater group which restored the theater and stages productions there.

It is believed to have been built by Joseph W. Holliday and John Monroe J. Holliday of Galivants Ferry as a memorial to their father, George J. Holliday. It had 650 seats, a “cry” room for mothers with small children, and certain seats were said to be larger than others to accommodate more robust patrons.

The Holliday Theatre abruptly closed in 1948. It was reopened January 1, 1952, closed December 31, 1953, reopened in September, 1954, and closed for a ten year period in August, 1955. It then reopened for eleven months as a second-run theatre. In 1965, the theatre was completely renovated. It closed its doors in August 1986. The final offering was “Top Gun” with Tom Cruise. After it closed, it was used as a church until January 1990, when it was destroyed by fire.

It has since been rebuilt as the Main Street Theatre, home of the reportory group, Theatre of the Republic.