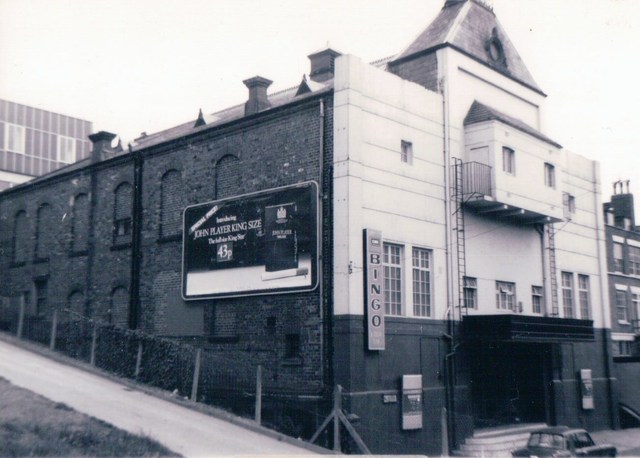 The Picturedrome was originally built in 1887 as the Temperance Hall. It was converted into cinema use in 1912, opening as the Picturedrome. By the early-1920’s, it had been re-named Coliseum Cinema. It originally had a seating capacity of 675 in stalls and circle levels, and was fitted with a Fitton & Hayley 2Manual/5Ranks organ.

Operated by Star Cinemas chain from 1955, it was closed on 22nd September 1962 and become a full-time bingo club. On 5th April 1963, films returned on certain nights in the week, with bingo on other nights. On 2nd July 1968, the last films were screened.

After many years operating as full time bingo club, films returned on 12th April 1987 with “Crocodile Dundee”, and it also was also operating as a part time bingo club. The Coliseum Cinema was closed for a few months in early-1993, then re-opened but was closed again on 7th June 1995 with “Muriel’s Wedding” and it was converted into a bingo club, but this was a short lived venture. In February 1999, work began gutting the then empty Coliseum Cinema to convert it into a community centre. 2001, it underwent restoration, re-opening on 23rd November 2001 with “Chicken Run”.

Some additional information on the Coliseum. I closed as a cinema on 22nd September 1962 to become a bingo club, but from 15th August 1963, it began to show films on Mondays, Tuesdays, Thursdays and Saturdays, with bingo continuing on the other three night. Films again ceased to be shown on Tuesday 2nd July 1968, the last programme being The Sorcerers + Mini Weekend. It then became a full-time bingo club the next day. On the Thursday, Star re-opened the Ritz after being closed for alterations and modernisation. This cinema would appear to have been previously known as the Waterloo but I have no further information about it. Can anyone supply extra details about it?

JohnGn; I have added a page for the Waterloo/Ritz Cinema.

The Coliseum is equipped to show films, but appears to be a theatre, education centre and wi fi café. Films are shown at the Pavilion on a regular basis.

Further to Buffer’s comment, on a visit to the town in October 2016 I noted that the only film shows at the Coliseum were fortnightly screenings by Whitby Film Society. As Buffer says, regular commercial screenings now take place at the Whitby Pavilion.