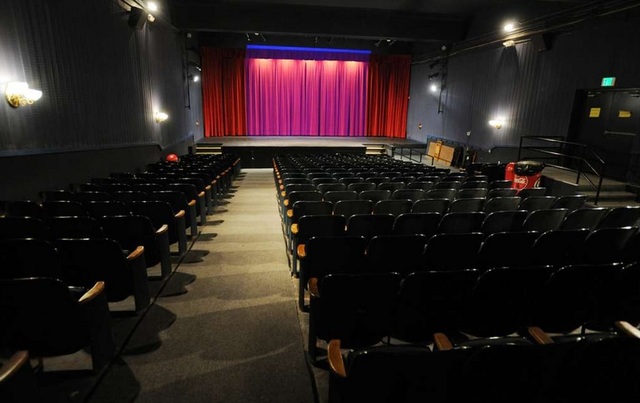 The Strand Theatre has been operating since at least 1941, when it was listed with 698 seats.

It underwent renovation in 1991.

The movies are stale, but the popcorn’s fresh. Second-run theaters show blockbusters after other theaters tire of them, but pushing a slightly used product for $2 to $4 a ticket doesn’t always pay the rent.

While many old theaters in Connecticut have been closing, others like the Strand Theater in Seymour stay open because people keep coming back for the atmosphere and the familiar faces. “It’s nice. You get to know the people,” said Jeri Swinik, who has been the manager at the Strand for 11 years. “They come like clockwork. This is their thing to do on a Friday or Saturday.” The regulars — seniors, families, couples — vary, but Swinik knows them all by name or story.

At the Strand, the red velvet curtains drawn back to reveal the screen make the theater seem like an old playhouse. The three regular employees — Swinik, the concession operator Amanda Dezolt, and the projectionist John Jelasko — make the outing seem like visiting a friend’s house.

Even the popcorn, soda and candy don’t feel like another movie theater: They only cost $2.50 each, less than half the cost of concessions at other theaters. “I don’t want to gouge the people,” Swinik said.

But that’s where these theaters make their money: the concessions. Film distributors can take anywhere from 50 percent of ticket sales upward, the number depending on which company the film comes from. On a night when Swinik rents out the theater to a private party, she said she will still open the concession stand to try to make a profit. It’s important, she said, that she can keep the theater self-sustaining.

If the money brought in from birthday parties, theater rentals, ticket stubs and concessions isn’t enough to pay the rising utility and rent bills, the town chips in the rest of the cost. Some years the town doesn’t pay toward the theater. Some years it gives as much as $20,000, according to the town budget.

But Swinik likes to be able to pay those bills. It’s often a battle, though, with movies playing in the first-run places longer, creating fewer crowds when the Strand finally gets the show. On a good night, Swinik said she can get 150 people. An average show brings about 75.

The customers said they hoped the Strand will remain open for more reasons than the cheap tickets and fun atmosphere. It’s the memories that keep some of them coming back. “It reminds me of the theater I used to go to as a kid,” said regular Strand customer Susan Grobnagger. “And I like that it’s trying to revitalize the downtown area. It’s nice.”

The theater was mentioned in the New Haven Advocate’s Annual Manual and it said, “Downtown Seymour is straight out of the 1950s, with a retro diner, a movie theater with ticket prices under $5 and antique stores galore. The Strand Theater still bears its original neon marquee and is one of the las single-screen movie houses in Connecticut.

I was in Seymour but when I called on Saturday to see if she could let me in to check the place out, the only time she gave me was 4:30pm, when she gets there. I was biking to New Haven from Southbury and couldn’t make it. Anyway, the interior lobby/hallway chandeliers are quite interesting. They look like 70s circular bathroom lights that you would put on the ceiling but they made them slightly ornate with faux gold chains to hang them from the ceiling. There’s some art deco glass squares on the outside of the theater. The building is quite long like a box, with no apparent stagehouse, even though it’s from 1921. Standing at the rear, there’s a small old school diner to the right and a big billboard directly in front of the rear. There’s a metal staircase going up under the billboard and then a platform and stairs going to the right and left to stagedoors.

The area it’s in is so interesting. The population is now 17,000 and when it was a booming factory town, it was still small. The Main Street is the smallest I’ve ever seen. Very quaint and spooky.

Good to see that it is still open,if only on the weekends, hope they can just repair the marquee instead of putting up those cheap looking replacements like most old theatres do.

The listed website doesnt seem to have info about the Strand. Does anyone know of a link where folks can donate towards the theater?

To donate, please send checks to:

Make checks payable to: Town of Seymour Culture and Arts Commission
Please write in the space provided on your check: Strand Theatre Donation

If you want to call them, use their phone number posted on their website.

The operators of the Strand are considering auctioning off a collection of movie posters currently stored in the theater’s basement: View link

The Strand has closed as the town has pulled out as the operator. The final movie was “It’s A Wonderful Life” on December 15, 2013. The theatre hosted live community show on December 21, 2013 and is now dark as the Knight of Columbus who own the building ponder its future.

The Strand Theater is not closed. One lease has ended but operations continue.

The Strand is owned and operated by the Knights of Columbus, Aurora Council 53, for over 50 years.

Godard: The Strand is no longer leased or run by the Town. The owners, since 1959, run the theater. We are all volunteers! Donations can be sent to 165 Main St Inc. 165 Main St Seymour CT 06483….not what is listed above. Keeping the marquee in working order is extremely expensive as are taxes, insurance, etc. $5 movies and various live shows fill the schedule at the Strand, a much beloved single screen theater. Yes, the popcorn is freshly popped and delicious! Concessions are extremely reasonable. Families love it. Cheap date night. Fun times! Much of the proceeds are donated to various organizations, food pantries, animal shelters. Thank You for your continuous support of the Strand Theater. We love to entertain you! John & Anna Fanotto and the Knights of Columbus Council 53.