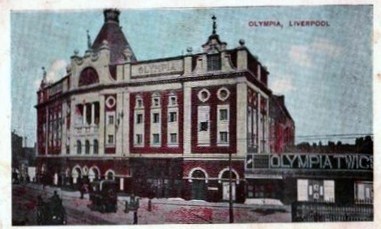 Following the enormous success of the Royal Hippodrome Theatre (4,000 seats; 1902-1931 stage; 1931-1967 cinema; demolished in 1980), a rival scheme from Moss Empires Ltd., resulted in the spectacular Olympia Theatre designed by Frank Matcham. It was located only a few hundred yards away from the Royal Hippodrome Theatre on West Derby Road in the Everton area, about 1 mile east of Liverpool city centre.

The Olympia Theatre opened on 24th April 1905 with a spectacular equestrian revue “Tally Ho”, direct from the London Hippodrome. Pictures on the Bioscope were an added attraction to the programme. Seating was provided for 3,750 in stalls, dress circle, upper circle and gallery levels, plus 12 private boxes. It has an ornate interior decorated with elephant heads and Indian panelling. It had a vast stage and was also designed to house circus events - the elephant, horse and lion accommodations still survive below the stage, as does the 42 feet diameter water tank which was used for aquatic shows.

It never matched the success of the Royal Hippodrome Theatre, just along the road, and it was closed on 7th March 1925 when the British National Opera Company presented “Faust” at the 2pm matinee and “Tannhauser” at the 7pm evening performance. After a three-week conversion, it reopened as a cinema on 30th March 1925 with Douglas Fairbanks in “The Thief of Baghdad” and Jack Dempsey in “A Society Knockout”. This work was largely confined to realigning the seats and installing a large screen at the rear of the stage - 30 foot from the front row of the stalls. The plasterwork and balconies were not altered. It now seated 3,400.

Associated British Cinemas(ABC) acquired the Olympia Theatre in 1930 and continued the film fare until it was closed on 25th March 1939 with Wallace Beery in “Stablemates” and Mickey Rooney in “"Girl School”. The nearby Royal Hippodrome Theatre had been converted into a cinema by Gaumont British in 1931, and the area just couldn’t support two huge cinemas which had a total seating capacity of 7,400 between them, plus there were other smaller cinemas in the area.

When war was declared in September 1939, the building was taken over by the government and used as a storage depot for the Royal Navy.

It was sold by ABC to Mecca Ltd. in March 1948 (it had not reopened after the war) and was converted into a ballroom known as the Locarno. Mecca bingo followed from 1964-82, then after being shuttered, bingo returned from 1987-1990.

After another period of disuse it was restored and is now used once more for live entertainment - including the circus.

It is designated a Grade II* Listed building by English Heritage.

More photographs of the Olympia here:–

Here is the official website for the Olympia Theatre:-
http://www.liverpoololympia.com/

Correction – the Royal Hippodrome, controlled by Rank, was demolished in 1980 NOT 1984 as is widely reported (including above).

Thanks for the correction Ian.

A side view of the Olympia Theatre in August 2008:
View link
Interesting to compare this recent view, with the early postcard view I posted above on Jul 9, 2005.