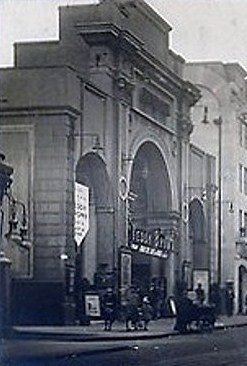 Located in the south-west London district of Battersea, not far from Clapham Junction Railway Station. Opened in mid-January 1916, the Electric Pavilion was operated by cinema pioneer Israel Davis, as part of his Davis Pavilion Circuit. Seating was provided for 1,500 and the cinema was equipped with a straight organ as well as an orchestra.

In 1926 the Pavilion Picture Palace was re-furbished and a new Compton 2Manual/8Rank organ was installed. The Davis circuit was taken over by Gaumont British Theatres on 5th June 1927. The seating capacity was reduced to 1,250 in 1936, allowing for more comfort.

The Pavilion Picture Palace was closed during the height of the London Blitz in September 1940. It re-opened on 29th December 1940. The cinema was destroyed by a German V1 flying bomb on 17th August 1944. The cinema was not open at lunch-time when the bomb struck, but 14 people were killed who were travelling in a passing bus, and a further 14 died in adjacent buildings. The site was cleared and remained empty for many years. Across the road, in 1952, a rebuilt parade of shops was named Pavilion Chambers. In 1985, the actual site of the Pavilion Picture Palace was built on, and a supermarket (today Asda) opened at the rear of the site.