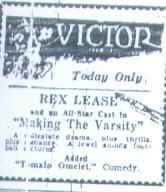 The Majestic Amusement parlor opened April 14, 1906. It was renamed Nickelet Theatre on May 4, 1907. On May 2, 1910 it became the Victor Theatre. It was an early Nickelodeon style theatre that was inserted into a mid-nineteenth century structure at 716 Hamilton Street, Allentown, PA. in the early days of theatre construction. From what I have been told by a senior citizen relative, you entered through a narrow entry located on either side of a ticket booth, and came in under the screen. This person says that there was always a large cat on the premises to help control the theatre’s rat population which you often felt running around at your feet during shows.

The Victor Theatre was closed around 1937. The building was absorbed, along with the adjoining buildings, into one large structure that was modernized for the headquarters of Lehigh Portland Cement.

This theatre began as the Majestic Amusement Parlor playing motion pictures at its opening on April 14, 1906 and claiming to be the first full-time motion picture theatre in Allentown. It was under the Joseph Kuntz Circuit which had similar locations in Brooklyn, Philadelphia and Reading. It likely had a one-year lease. The location had been in operation since around the Civil War as an ice cream parlor and Freddie Allen’s Saloon and Palace Cafe.

A year later, the theatre got a new owner in Dave Cohen who renamed it the Nickelet Theatre relaunching on May 4, 1907. The Victor opened at 634 Hamilton on May 2, 1910. The operator of the Victor bought the Nickelet in November of 1911. The original Victor closed on May 30, 1911 with that location razed. The Victor would move into the Nickelet’s spot in 1912. It’s a bit hard to tell exactly when the the Victor closed with listings into 1937 but bookings ending prior to that. Either way, it closed and the building was razed in 1938.

The Victor theatre opened on March 12th, 1910 at 634 Hamilton St. according to this newspaper clipping.

Here is the newspaper article confirming the opening date of the Majestic by dallasmovietheatres.