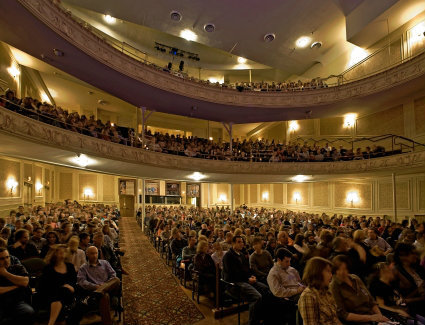 The former Lyric Theatre is now the Miller Symphony Hall (previously the Allentown Symphony Hall) and is Allentown’s main performing arts facility, a success story for this 1896 Central Market Hall building. It was converted to a theatre three years later by the architectural firm J.B. McElfatrick & Sons, and named the Lyric Theatre, opening on October 10, 1899. The stone facade seen today was added in 1920. By 1941, it was operating as a movie theatre, but had closed by 1943. In 1953, it became the home of the Allentown Symphony Orchestra, which owns it outright.

Beginning in 1991, a nearly-$10 million renovation process moved forward on restoring and improving the theatre, including an upgrade to stage facilities.

The theatre’s third floor features the Rodale Community Room which is often booked for receptions, recitals, and other private and corporate events and dinners for 160 to 200 guests with elevator access and parking nearby.

The Lyric Theatre as designed by John McElfatrick was Romanesque Revival in style, but sometime around 1920 the 6th Street facade was entirely replaced with a new Beaux Arts front. The side wall along Court Street remains Romanesque to this day.

To help keep the doors open in the late 50’s the Lyric featured traveling burlesque on Saturday nights. I have fond memories of when my friend and I would buy the cheap balcony seats and spot his father’s bald head down in the orchestra.

The Lyric was a stop on the last surviving burlesque circuit in the United States. The Saturday night shows were wonderfully entertaining and drew huge crowds, including lots of couples. I think the shows were still going into the 1960s. Does anybody know just when they ended?