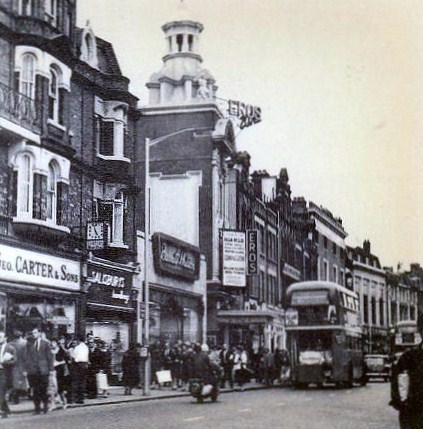 The building was rather similar to the later Picture House/Odeon(1928) located along the street, which when built had its screen end wall adjacent to the rear of the Empire Theatre. One similarity was the narrow entrance on North End, which at the Empire Theatre had a dome, topped by a cupola with a winged figure on top. There was a corridor, which led to the auditorium, which was located at the rear of the buildings on North End. Seating was provided in orchestra stalls, dress circle and gallery levels. The proscenium was 30 feet wide, and the stage 30 feet deep. There were eight single dressing rooms and the orchestra pit could accommodate 14 musicians.

Films were screened as part of the variety programme from the early days, and in 1930, the Empire Theatre became a full time cinema and was equipped with a Western Electric(WE) sound system, when it opened with Cliff Edwards in "What Price Melody?" and Bob Steele in "At the Rainbow’s End". It was operated by Metropolitan and Provincial Cinematograph Theatres Ltd. Variety was still performed on the stage, and from September 1938, the Empire Theatre became part of the Moss Empires theatres chain and returned to live variety shows, showing films only on a Sunday.

Taken over by the Hyams brothers in February 1946, it played its final live show "Soldiers in Skirts" on 9th May 1953. The Hyams brothers had already taken over the former Hippodrome Theatre at Rushey Green, Catford and converted it to cinema use as the Eros Cinema, and they did the same at the Empire Theatre, Croydon.

After a week of closure, it re-opened as the Eros Cinema, and programmes tended to be (X) certificate Continental films and also classic Hollywood films that had been purchased for re-issue by a distribution company named Eros Films.

In February 1959, the Eros Cinema was purchased by a development company, and it was closed on 30th May 1959, with Dean Stockwell in "Compulsion" and William Holden in "Streets of Larado". The building was demolished, and later shops were built on the site of the auditorium, with the entrance making way for an entrance into the Whitgift shopping centre.

My first job as a professional librarian was pasting in replacement adverts for horror films in Croydon, cut out of the local paper. I have an example from the Eros but sadly CT cannot accept the format.