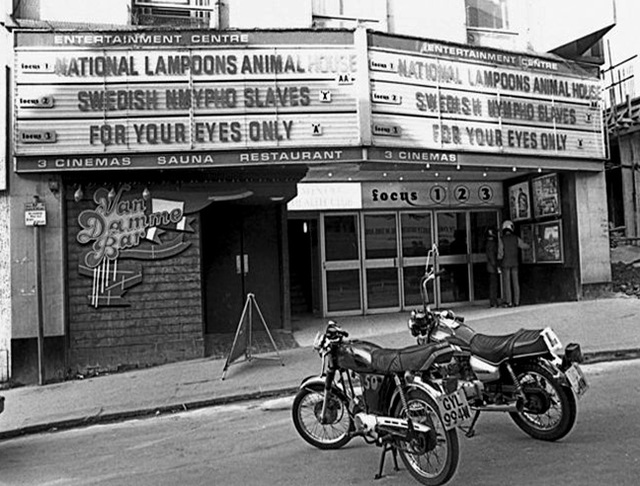 The building was on the site of the Croydon Hippodrome Theatre, which was demolished in 1956 (it has its own page on Cinema Treasures), and using the original façade (modified), the current building became an extension of British Home Stores. They had pulled out of the building by 1971, and the chain of Classic Cinemas Ltd. converted the building into a 3-screen cinema, which opened on 26th August 1972. Screen 1 seated 213 and opened with "Mutiny on the Buses" & "The Man Who Hanged Himself", Screen 2 seated 193 and opened with "What’s Up Doc?" and "Ski Raiders" and Screen 3 seated 112 and began as a non-stop cartoon cinema (but soon went over to feature films). Classic also operated a restaurant and a sauna in the building.

From 20th January 1974, it was taken over by the Brent Walker Group and was re-named Oscar Cinema. Like other cinemas in the chain, it was re-named Focus Cinema from 11th April 1974, after objections on the use of the name ‘Oscar’ by the Los Angeles Academy of Motion Picture Arts and Sciences.

The Focus Cinema closed on 14th August 1982, and became a fitness centre and snooker club. By 2006, the building was in use as a Walkabout bar, a nightclub named Fyeo and a billiard’s hall named Loop Poolbar.

A vintage photograph of the Classic Cinema soon after opening in 1972:
View link

The second screen 1 opening movie was most likely the 1970 film “The Man Who Haunted Himself” starring the late, great Roger Moore. (I also saw my first screening of “Star Wars” there.)