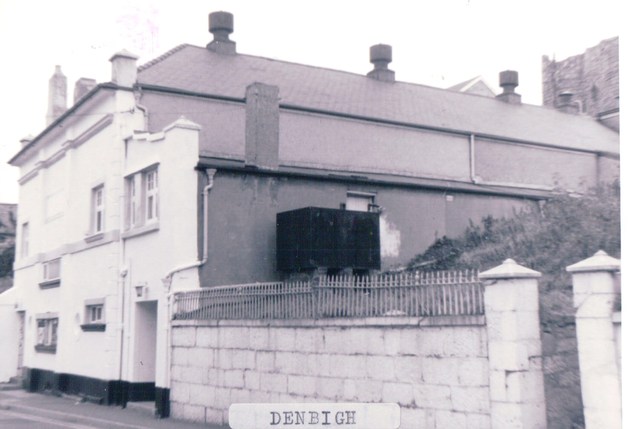 The Scala Cinema opened in 1928 and had a seating capacity for 450 in stalls and circle. In 1966 it was taken over by Wedgewood Cinemas Ltd. and re-named Wedgwood Cinema. It was closed on 26th October 1980 with “Rabid” and “Dead of Night”.

Taken over by Peter Moore, who operated several other cinemas in the area, it was re-opened. Later, he was convicted in 1996 and given a life sentence, for the killing of four gay men in 1995.

After he was jailed the cinema went to new owners, and and for a brief period it was last known as the Futura Cinema.

After closing in April 1996, the auditorium was used as a secondhand furniture store for a while, and the front part of the building became a video hire library. In 2009, the building is in a derelict condition and has been granted planning permission to be turned into eight apartments. The building is currently being offered for sale at a price of £215,000

The owners were Deeside Enterprise Cinemas Ltd who equipped it with a British Acoustic sound system. The cinema could seat 450 patrons at prices of 6d to 1/3d in 1938. By 1951 seating had been decreased to 400 seats and shows were twice nightly with matinees monday, thursday and saturday with prices now 9d to 1/9d. An Imperial sound system had replaced the original British Acoustic one by now.
In 1966 the venue was taken over by the Wedgewood Cinema Ltd group who changed the name to the Wedgewood and changed the sound system yet again to a British Thompson-Houston system. Strangely the Kinema Weekly Yearbook lists both the Scal;a and the Wedgewood that year.
Taken over by Peter Moores in 1996 after it had been closed for a number of years (He also had interests in the Empire, Holyhead and Empire Picture Palace, Blaenau Festiniog, it is doubtful whether he actually re-opened the cinema, but had just finished renovating it when he was arrested and charged. As stated it is currently for sale with permission to turn it into apartments. At the price it would seem an ideal project for a restoration Society!

The cinema was owned by Lewis Colwell from 1982. Peter Moore rented it from him, but didn’t own it. PM did have the place running for a time, but it wasn’t for very long. Lewis oversaw the video rental side which continued after the cinema closed. Such a shame to see this place go to ruin, but the whole town has gone the same way.