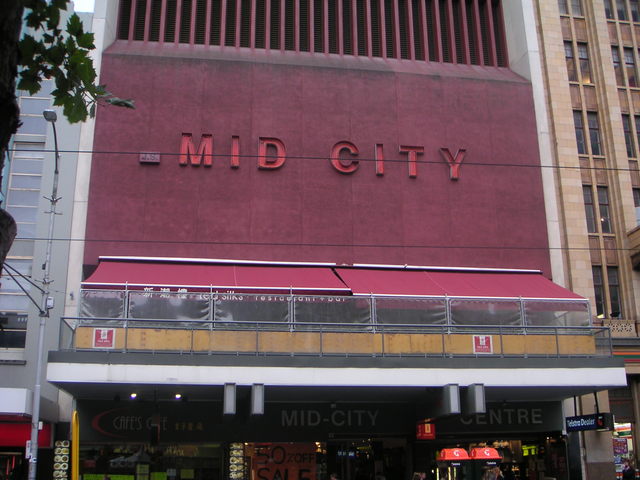 Opened on 26th November 1970 by Hoyts Cinemas as a twin screen cinema, it was first known as Hoyts Mid City Cinemas 4 & 5 (In 1969, Hoyts Cinema Centre had opened just along Bourke Street, with its screens numbered 1, 2 & 3). The two screens at Mid City are located on the 2nd floor level above the Mid City Arcade. A huge foyer is located at 1st floor level above the ground floor shopping arcade. It was the first cinema to be built in Australia with back-to-back auditoriums, both sharing a common single projection box. Seating was provided on a single level, with a stepped area at the rear. The actual screens are huge and stretch from wall to wall. They were equipped to screen 70mm and Todd-AO format films. Seating was provided for 750 in Cinema 4 which opened with Oliver Reed in “Women in Love” & 932 in Cinema 5 which opened with Martin Balsam in “Tora, Tora, Tora” presented in 70mm.

On 18th December 1975 a third 217-seat screen was added, opening with Alan Spitz in “The Coming of Seymour” (aka “Fabulous Fanny”). It is located underneath the largest screen, utilising part of the main foyer area. Projection in this third screen is via a periscope from a projection box that was constructed in the shopping arcade below. It then operated as Hoyts Mid City 4, 5 & 6.

Hoyts operated it as a regular city centre cinema until 26th April 1992. Since then it has been leased out, and screens Chinese films, and also films from India and Korea. It is now the only cinema operating on Bourke Street, which once boasted over 18 cinemas over the years. In 2017 only Cinema 5 remains in operation screening Chinese films. The former Cinema 4 became a book shop (which had closed by 2021) and the Cinema 6 was unused until by 2021 it was in use as a restaurant.

A photograph of the rear entrance to the Mid City Complex on Little Bourke Street, which I took in February 2010:
http://www.flickr.com/photos/kencta/5181595037/

‘The Coming of Seymour’ did in fact come out on December 18th in 1975. It was also known as ‘Fabulous Fanny’ but not released in this country under that name. First film I saw in this cinema was ‘New York, New York’.

The book store that operated in the former cinema 4 has closed and the space now sits empty, cinema 6 space is now a restaurant and the huge cinema 5 remains screening mainly Chinese movies but has been significantly reduced in capacity by bringing a new (much smaller) screen forward effectively cutting the original auditorium in half.