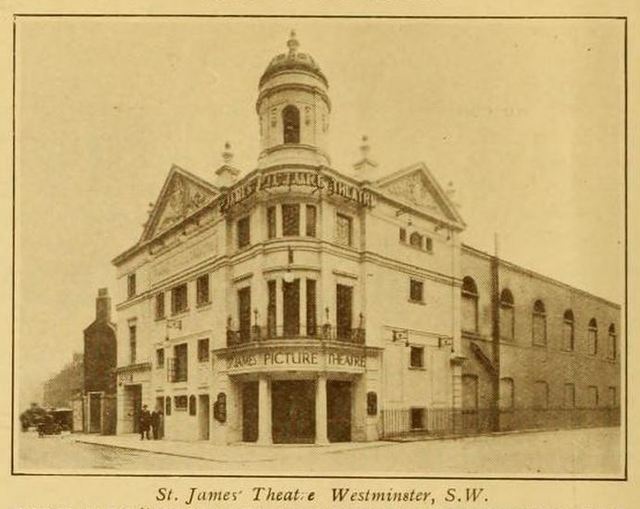 Built in 1766 as the Charlotte Chapel, in 1849, it became St Peter’s Chapel, which was closed on 25th September 1921. In 1922, it was reconstructed into a cinema, to the plans of architect John Stanley Beard. The St James' Picture Theatre opened on 9th April 1923 with the British film "Rob Roy". The corner entrance at Palace Street and Palace Place was newly built, and had pediments across the top on each side, with a central cupola. Externally, the bulk of the chapel remained, but inside the auditorium, was a splending Neo-Classical style space, with the projection box at the rear of the stalls, and a series of four private boxes at the rear of the dress circle, especially requested to be installed by the Royal family. As it was located close to Buckingham Palace, it became a favourite cinema attended by the Royal family, especially the Prince of Wales who was a frequent visitor.

The St James' Picture Theatre was soon overtaken by much larger and sumptious cinemas that were opening in better locations in the Victoria area, and it was closed as a cinema on 28th March 1931.

It was remodeled, mainly the proscenium and stage area, by architect Arnold Dunmar Smith. A safety curtain was installed, which had a beautiful painted scene of the River Thames and Houses of Parliament. The theatre had 10 dressing rooms. It re-opened as the Westminster Theatre on 7th October 1931, with "The Anatomist" a play by James Bridie starring Henry Ainley and Flora Robson. The theatre was operated by Anmer Hall, who employed Tyrone Guthrie as artistic director. It was a popular playhouse during the 1930’s/1940’s, and artistes involved in the operation over these years included J.B. Priestley, Sir Donald Wolfit and Robert Donat.

The building was refurbished in 1965, to the designs of architects John & Sylivia Reid, with a new entrance, cafe, and meeting rooms. The facade was covered in Welsh slate from the Cader Idris area of Wales. The auditorium was not touched in the restoration. It re-opened in September 1966, with Moral Re-Armament still producing moralistic plays and musicals.

In later years, the theatre was more ‘dark’ than open, and it was leased out to producers of several major West End shows, which were staged, but flopped. In 1990, it was closed for quite some time. Last used as a venue for ‘Old Time Music Hall & Variety’ in around 2001, plans were proposed to redevelop the theatre into a new ‘fringe’ live performance venue. Sadly, the the theatre was not a ‘Listed’ building, and little was done to save it. Demolition of the theatre began in February 2002, but was halted when most of the building was destroyed by a fire on 22nd June 2002. It was the first ‘live’ theatre to be demolished in London since the 1960’s. Funding for the new project then ran out, leaving an empty plot of land for the following six years.

Construction on a new building began in 2008, with plans for a new theatre space to be included. The new St James Theatre opened on 18th September 2012 with the play “Bully Boy” by Sandi Toksvig. Designed by Foster Wilson Architects, it is a 310-seat theatre, which also has a 110-seat studio theatre. It is the first live theatre to be built and opened in central London in over 30 years.

The Westminster site has been built upon and does contain the shell of a replacement theatre – – but on-going discussions are disputing who has to fit out the shell. The old theatre was used right up until the end when following a arson attack, the remains of the building were cleared.

A view of the Westminster Theatre here:–

I believe that the Jason Donovan video of “Any Dream Will Do” was filmed in the Westminster Theatre.

A shot of the rear of the Westminster showing the flytower and dressing rooms:

Thanks Ian and Ken.

A photo of the St. James Picture Theatre illustrates an advertisement for W. J. Furse & Co. on this page of the technical supplement to The Cinema News andProperty Gazette, published October 2, 1924.