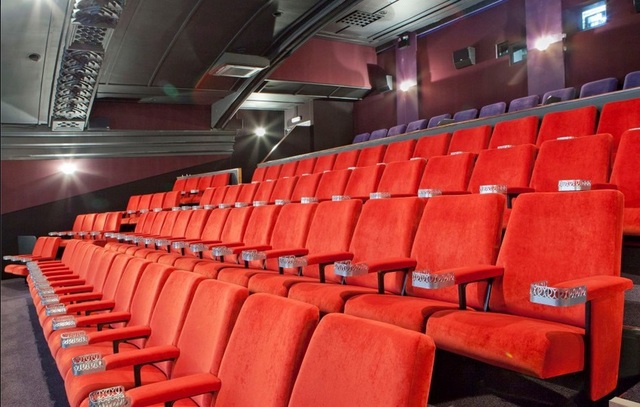 A gorgeous small town cinema seating 897 in stalls and balcony, the Regal Cinema opened in 1933 and was designed by a Mr Riley of architectural firm T. Denman & Sons.

In 1979 Zetters bingo bought the building and converted the stalls area into a bingo club, with a 226-seat cinema operating in the circle. In recent years it underwent some restoration. The bingo club has now been converted into a bar. Seating the cinema is now provided for 110.

The colourful facade is formed of faience tiling. It was renovated in 2013 to the plans of architect Bill Chew.

Was in Melton Mowbray just before christmas 2004. The cinema now only occupies the balcony area, with the entire stalls/stage area having been used as a bingo hall. This part of the building is now occupied by a large bar called ‘The Cutting Room’. The dividing wall at the front of the balcony where the screen is now located is used by the bar to project television pictures. The main bar and toilets are located in the area where the stage and original screen would have been located. I have been in the cinema once (about 6 years ago) it now probably holds about 200-250.

the exterior of that building is simply heavenly! i love the use of color.

Would have loved to see it in it’s heyday, bet she was a real beauty.

A couple of recent photos of the Regal can be seen here:–

This wonderful cinema is currently in the very safe hands of manager Jacob Mundin, a member of the family that has rescued the Ritz at Belper, Derbyshire, and the Savoy at Heaton Moor, Greater Manchester. After initially re-opening in March 2013, The Regal re-opened again on 23rd June 2016 following further refurbishment and is proving extremely popular with local cinemagoers (as is the membership scheme, which allows members £1.50 off the ticket price, together with other benefits).

But tribute should be paid to former operator John Merryweather, who took over in 2000 but sadly died, at only 65 years of age, in April 2012. In April 2007 he proved to be a very welcoming host during the Cinema Theatre Association’s visit to Leicestershire. No doubt he would be delighted that his cinema is continuing to provide the town’s film entertainment.

I’m wondering if there are any surviving interior photos of the Regal in stalls and circle configuration?