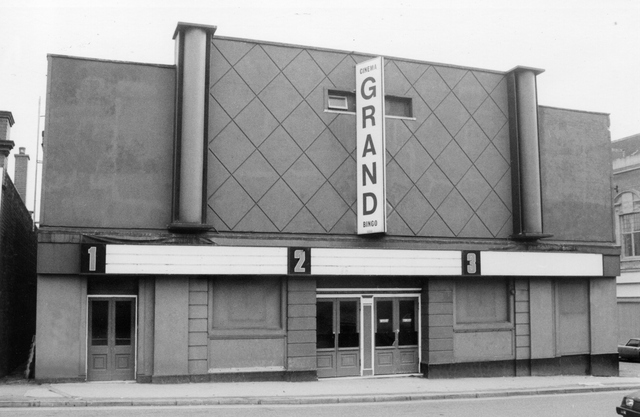 Located in Leek, Staffordshire. A small provincial town theatre dating from 1909. It was equipped with a stage 20 feet deep and had a 25 foot proscenium opening. There were 6 dressing rooms.

It was converted into a cinema in 1931. It became a triple screen cinema in the 1970’s with the circle remaining as the largest screen and the stalls split into two screens.

In 1983 screen 1 (the circle) became a bingo hall but films continued in the two downstairs auditoria.

On January 30, 1986 the Grand Theatre closed with “Santa Claus:The Movie”. The following day all seats and equipped were stripped from the building. In 2003, the Grand Theatre was demolished and replaced by housing.

The theatre/cinema has now been demolished to make way for housing on the site.
R Martin. Leek

Originally opened in 1909 as the Grand Theatre & Hippodrome it became the Hippodrome Theatre in 1915. In 1931 it was re-modelled and began cinema use re-named the New Grand Theatre with a seating capacity of 1,758.

Correction Seating capacity was 662 when a single screen.. Before Hutchinson owning the Grand it was Buxton High Peak Entertainments Ltd., Converted to a Triple by Modernisation Ltd.,

Buxton High peak also owned “The Regal” which was near by.. That had 621 seats Screen 21' wide. I visited Regal when the Bingowas stripped out.

Shaun Green on 1987 I took this photo of the Grand Cinema about 12 months after it closed for good.

I was chief projectionist at the Grand from 1984 to 86 and showed the final film “Santa Claus the movie”. Just thought I`d correct a couple of things; 1. Conversion to three screens; screen one was in the circle and two and three in the stalls. 2.Screen 1 (old circle) was converted to bingo 1983/4 leaving two screens in the old stalls

Thanks for amending info in your description