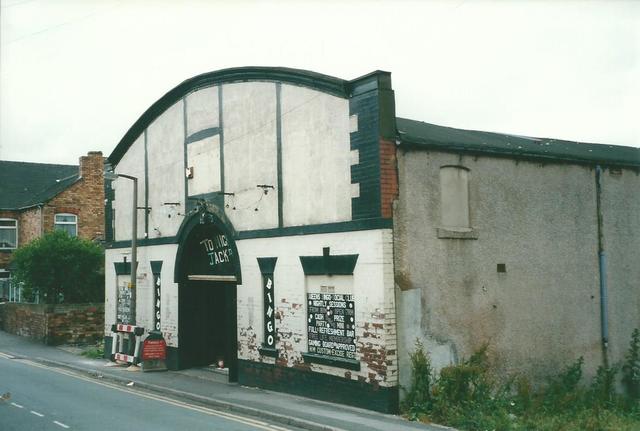 In Smallthorne, a suburb of the Staffordshire Potteries town of Stoke-on-Trent, the Picture Palace was built in 1913 and opened in 1914. (This is presumably the 350-seat Picture Palace that is listed in South Lord Street, Smallthorne, in the 1914 Kinematograph Year Book. And the same Picture Palace shown in the 1931, and later, editions as being in South King Street. Neither street now exists, and I found the former cinema in Jupiter Street. So presumably much street renaming has gone on in this densely developed residential area.)

No proprietor is shown for 1914, but from 1931 to 1953 the owner was Smallthorne Picture Palace Co. Ltd. By 1940 the seating capacity as given as 450. So, if the original capacity of 350 is correct, the building was obviously extended at some stage.

The Picture Palace closed in 1963 and moved over to bingo. That ceased in the early-1990’s. In the summer of 1998 the building was put up for sale for £40,000. It was in a pretty bad way, though the exits had been bricked up to try to prevent further vandalism. A local property developer was said to be interested in demolishing it and replacing it with housing. By the time I visited, in July 2001, that had not happened, and the building was still standing. But my guess is that it has gone by now.

Jupiter Street was also the base for The Potteries Transport and Cinema Supply Company, which, with its fleet of navy blue Thames Trader lorries, delivered films picked up at the film companies in Birmingham to 68 cinemas across South Cheshire and North Staffordshire, as well as picking the films up after the last run and taking them back to Birmingham. When I started work as a projectionist in 1962, this was still a huge undertaking. But gradually, the cinemas closed one after the other and the company no longer had the work to keep the company viable. By the late 1970s, they appear to have gone and were replaced by a white transit van belonging to the Film Transport Service, who delivered films to the by then very small number of cinemas that were still open. Only three or four by that time out of some 35 that once flourished across the area.