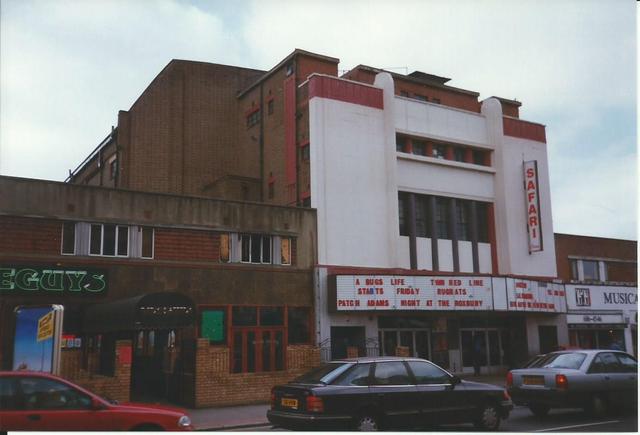 Located in West Croydon, Surrey, today part of south Greater London. Opened on March 9, 1936 with Sylvia Sydney in “Mary Burns, Fugitive” and Henry Hall & His Band in “Music Hath Charms”, plus Laurel & Hardy in “Thicker Than Water”. The Savoy Cinema was designed by William R. Glen, the in-house architect for Associated British Cinemas(ABC). It was sited a fair distance outside the town centre. Lighting in the large spacious auditorium was entirely indirect, mainly from troughs on the ceiling.

On March 31, 1953 an electrical fault resulted in a fire which totally destroyed the auditorium. Post-war building restrictions were still in force and the repaired Savoy Cinema reopened with a utilitarian appearance on December 27, 1953.

In July 1958, it closed to allow a more extensive reconstruction to take place. When it reopened as the ABC on 19th October 1958, it held 2,118 and had been lavishly appointed. Live pop shows came to the ABC in the early-1960’s, with artistes such as Billy Fury, Cliff Richard, The Beatles, Gene Pitney and the Everly Brothers appearing.

Tripling caused the next closure - from May to November 1972. The rear circle became 650-seat screen 1 with the stalls split into screen 2 (390 seats) and 3 (187 seats). All had bland unadorned décor.

Re-named Cannon in 1986 and Safari Cinema in the late-1990’s a small 4th screen was created in the lower part of the building. The Safari Cinema closed in 2004 and was torn down in stages between March 2005 and April 2007.

I think it may have lost. Closed and rumoured to be awaiting demolition as we go into 2004.

The former Savoy Cinema is being demolished late March/early April 2005. The site is earmarked for residential use.

From what I have been told only the adjacent shop units have been demolished. The cinema building still remains in April 2006, awating its final ‘death’.

still standing but only just – great bites taken out of the Eastern side! Sept.2006 For some very good pictures of the interior – Safari-time – go to the Local Studies at Croydon Library filed under “London Road” plus huge queues for the opening night.
Benrayner

The remains of the building were finally demolished in April 2007

oh safari cinema…the 50p days to watch a movie and now it is just flat land waiting to be built most probably into flats…and the music shop next door got the taste of the bulldozer too :(

Photo still operating as the Safari in 2001:–