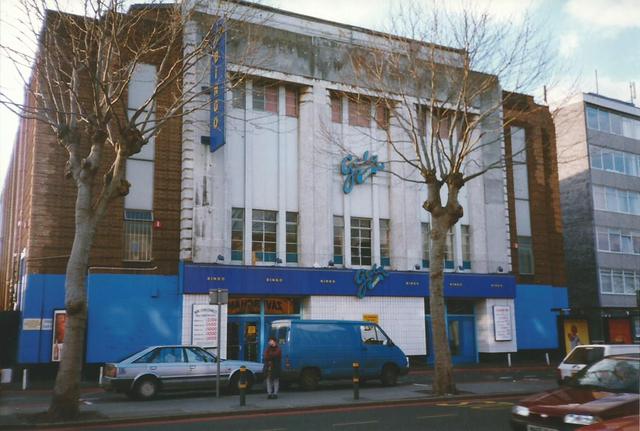 Located in Thornton Heath, a district in the south of Greater London, just to the north of Croydon. The State Cinema was designed, built and operated by A.C. Matthews. It was opened on 26th December 1932 with Buster Keaton in "Speak Easy" and Alexander Carr in "Divine Love", plus Herman Darewski and His Band on stage.

The exterior had three tall windows framed in grey marble. Inside the auditorium, the seating was provided in stalls and circle levels. The ceiling had a series of bands across, while the side wall panels had painted pastoral scenes. The proscenium was 44 feet wide. The stage was 20 feet deep and there were five dressing rooms. There was a café located on the circle level foyer, above the entrance.

It was taken over by the Granada Theatres chain in May 1948, and was re-named Granada on 1st January 1949. The Granada was closed on 1st July 1972 with Michael Caine in "The Italian Job" and Tony Curtis in "Monte Carlo or Bust".

It was converted into a Granada Bingo Club from 13th October 1972, and later was operated by Gala Bingo. It was closed in 2007, a casualty of the smoking ban in public places, and the building was soon demolished.

I am trying to trace former staff of gala bingo t heath that I had the pleasure of working with,please sign up and send me an email .uk