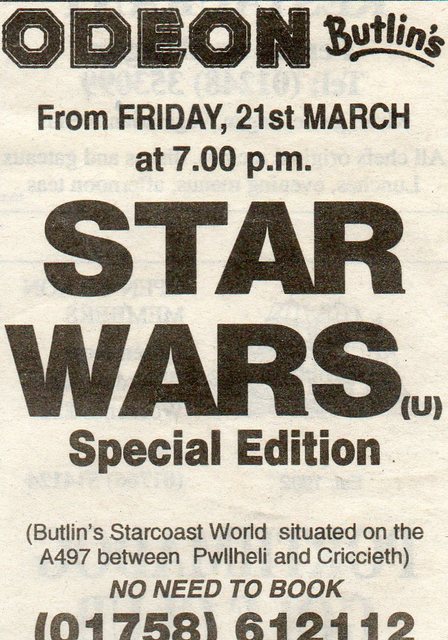 Afon Wen is a hamlet of two clusters of around 12 dwellings, some 4 miles outside Pwllheli. It is here that Butlins built their Pwllheli holiday camp.

Under construction at the outbreak of World War II, the Government ordered its completion in 1940, so that it could serve as a Naval Training camp, complete with a Camp Cinema. The cinema served a dual purpose, with training films being shown during the day and the latest films shown at night to keep the occupants amused. When peace came the cinema was named the Empire Theatre, catering for holidaymakers staying at what had become Butlin’s Holiday Camp. It was in live theatre use as well as cinema use.

When the Rank organisation took over the Butlins camps they refurbished the cinema and it re-opened in May 1992 as the Odeon Cinema, when the camp was re-vamped as Butlins Star Coast World. In December 1992 it was decided to allow the general public access to the Odeon Cinema, there being insufficient holidaymakers to warrant its existence alone, especially during the winter months.

Then, in September 1997, Rank sold the holiday camp to Haven Holdays. The cinema continued to serve both holidaymakers and locals until 29th October 1998, when the final film was Drew Barrymore in "Ever After: A Cinderella Story", and the cinema was closed. It was subsequently demolished, and the camp is now known as Hafan y Mor Holiday Park(Haven Holidays, the site of the cinema is a now a wildlife garden.

I helped out at the Odeon Butlin’s during the period that Neuadd Dwyfor cinema Pwllheli was being refurbished,as the resident projectionist had been taken ill. The projectors were 2 Cinemecanicca Victoria 8 machines, Dolby Surround Sound and the xenon lamps were encased in converted Kalee lamp houses. Although the films opened on the nationwide release date,the Odeon company did not seem all that interested in the place,I don’t think the equipment was serviced very often and the screen tabs (curtains) did not work at all. Still it was a neat little cinema,but might have been better if it was not situated so deep inside the camp,locals had to check with the security to get in.

The cinema was housed in one of the former variety theatres (The Empire) they started the conversion with the intention of providing a 2 screen cinema,but changed their minds half way through and used the other half for bingo, I think the signs for screen 2 were still up.

The above address is incorrect, Lon Dywod (Sand Street) is in the town of Pwllheli itself, Butlins was in the village of Penychain about 4 miles out of town.

A photo of the theatre as the Empire can be seen here.

Thanks CSWalczac, I have an exterior photo somewhere of the building when it was an Odeon, if I find it or the negative I’ll post it here, I also have some of the interior.