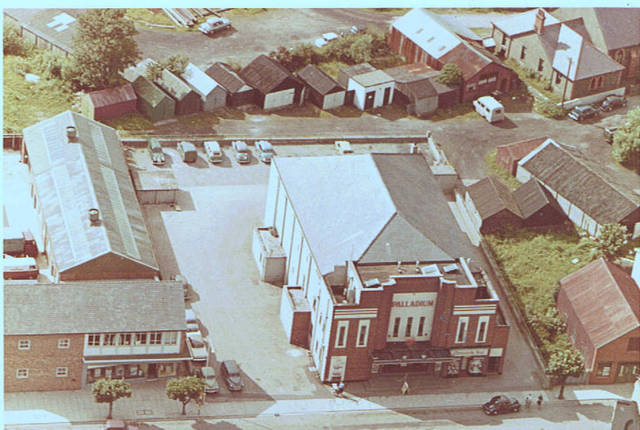 The Palladium Cinema opened in 1935 with the film “The Camels Are Coming” starring Jack Hulbert. The cinema had a café attached, for the convenience of patrons. It was operated by W.E. Pritchard. When he died in 1945 it was taken over by the Paramount Picture Theatres Ltd. chain, based in Welshpool.

The screen was 35 feet wide on CinemaScope format. It was installed in front of the old proscenium in order to ensure they had a bigger screen than the opposition council run cinema, which incidentally is still open. The Palladium Cinema or the ‘palled’ as the locals called it, was closed on 22nd October 1977 with Henry Brandon in “When the North Wind Blows”. The equipment at the time of closure consisted of 2 Kalee 20 projectors, a British Acoustic(BA) sound system and 2 Kalee Vulcan arc lamps.

It was converted into a supermarket, and demolished in the late-1990’s when a new purpose built store opened.

This was a great loss to this small town of ours. The chief projectionist the late John Hughes (John Palladium) was there more or less from the very beginning, until the closure.

After demolition they built a Jobcentre on the site.

Eric – Thanks for that. After all these years, at last I know what that sinister thing was! I’ve just seen your pictures of the Palladium being demolished which I had never seen before. I can’t help having a lump in my throat. How could they have demolished such a beautiful building? The pictures of the proscenium arch are great! Meanwhile I have added some circa 1955 photos taken from the roof of the Palladium (the little balcony at the top right-hand side of the building looking at it from the front) looking up and down Cardiff Road and also across to the Maes. I just wish I’d attempted a time exposure photograph of the box and the projectors. ….Too late now!

Hi David, your photos are brilliant, I can see the fencing or barriers on the Maes end of the path from Cardiff Rd. We lived on the Maes for many years, and it was my Dad who suggested to the Town Council that the barriers would be a good idea as the children used to run from the Saturday afternoon matinee straight into the road at the Maes. We lived at Siop Newydd where Alan’s Hairdresser is now situated, that is where from that I photographed the Palladium photo you found on Flickr after the garage was demolished. The barriers are no longer in place, but then neither is the Palladium.

Hi David, I’ve just added a couple of comments under the photo.

I’ve uploaded a picture depicting the Palladium during the war years, just click on photos.

Eric – superb painting of the wartime Palladium. I wonder who owns that painting now? ..I’ve just come across a 1950s picture of the Regal Cinema, Beaumaris (now demolished) and added it to the Regal page. As it’s a “sister” cinema to the Palladium (although much smaller) I wondered if you had any technical details?

Hello David, No idea who owns the painting, I took a photo a few years ago of what I was told was the old Regal in Beaumaris. It was then a private dwelling, must say it did not look like a cinema, or a new house.

Just looked up the Regal, that’s not at all the building I saw, I was obviously given the wrong information. It’s quite an impressive looking cinema. I’ll have to go to Ratings Row again next time I visit, and see if someone can show me the correct site.

Me again David, I just looked up the details in my old Cinema Directory for 1958, all it states about the equipment is BA sound (British Acoustics) and that they had 320 seats. Did you ever go inside David ? Billy Kenny who sadly died this year once worked there for a week or two as a relief projectionist, he was then second at the Palladium before he started as the Chief at the Town Hall, (Pwllheli of course in case any one else is reading this)He was the Town Hall’s manager for the last 19 years until his retirement.
I think the equipment he worked on were Kalee 12s.