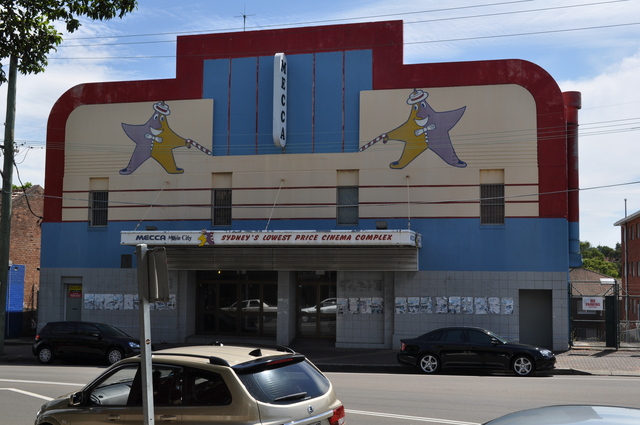 Located in the south Sydney suburb of Kogarah. The Victory De-Luxe Theatre was opened on 17th November 1920 with a seating capacity of 1,800. The opening film was “The Brass Bullet”. It was equipped with an American Seeburg Electrical Orchestra pipe organ, with 2Manuals on the console and 3Ranks of pipes in the organ chambers located on each side of the proscenium. In August 1928, a new Christie 2Manual/7Ranks theatre organ was installed and opened by organist Leslie V. Henry formerly organist at the Prince Edward Theatre, Sydney. Other organists to play this instrument were Horace Weber, Eddie Horton & Knight Barrett. From 9th November 1928, the theatre was re-named New Victory Theatre.

The Victory Theatre was re-modeled in 1936 in an Art Deco style to the plans of architectural firm Crick & Furse. The exterior was given a Streamline Moderne style. Inside, there were Chevron style decorations on the side-walls and similar decorative features on the ceiling. The seating capacity was reduced to 1,534. Organist Denise Palmistra reopened the organ on 10th October 1936.

The Christie organ was removed in the early-1950’s. The cinema was briefly re-named Avon Theatre in the 1960’s. Taken over by Mecca Theatres on 9th December 1971, it was renamed Mecca International Theatre. A Conn elecronic organ was installed at that time. It was remodeled again in 1975, giving the theatre a new ceiling and a false proscenium. A 3Manual/8Ranks Wurlitzer organ was installed, which had originally been installed in the ABC Ritz Cinema, Richmond upon Thames, England, UK. Pantomimes and live shows were introduced to supplement the film programming.

In 1990, the cinema was divided into four screens, and was closed in September 2003. It was demolished in February 2013.

Thanks Ken for the picture.

In the mid 70s it was a terrific and eccentric cinema. However the owner displayed personal wanton disgrace, and in the 90s it was closed. That person is now in jail.