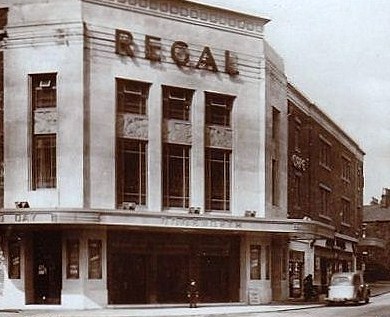 Located on the corner of Broadway and Cornhill. The Regal Cinema was built for and operated by an independent operator. It opened on 12th April 1937 with Fred MacMurray in "Champagne Waltz", and Eddie MacGarry’s Band on the stage. Seating was proved in stalls and circle levels, and there was also a cafe/ballroom on the first floor of the building.

Taken over by Oscar Deutsch’s Odeon Theatres Ltd. on 28th February 1944, it was re-named Odeon on 9th April 1945. Later becoming part of the Rank Organisation, it was sold to Classic Cinemas chain on 10th December 1967 and re-named Classic Cinema.

The Classic Cinema was tripled in October 1973, with seating now provided for 338, 189 and 128, and a bingo club. Unit Four Cinemas took over from 9th August 1981, and it was re-named the Unit Four Cinemas. It was later taken over by the Apollo Leisure Group, and was closed on 25th March 1990.

Plans were announced to demolish and build shop and new cinemas on the site, but these came to nothing and after a while, the derelict building was demolished and the Arndale Shopping Centre was built, which includes a Boots and Specsavers on the actual site of the cinema.

I think I could have come up with a better name than Unit 4 Cinemas.

I’ve uploaded a photo from the early sixties of the Projection Room,it was given to the former manager of the Town Hall Cinema Pwllheli by the 2nd projectionist of the Odeon. Does anybody remember the hobby of tapesponding ? something similar to pen friends only instead of letters people used to send recording tapes. And this was before audio cassettes. Bill Kenny the Town Hall’s manager was also a projectionist in those days.He passed away this year, I don’t recall the name of the chap at the Odeon Accrington.Sorry about the condition of the photo, I just found it today.