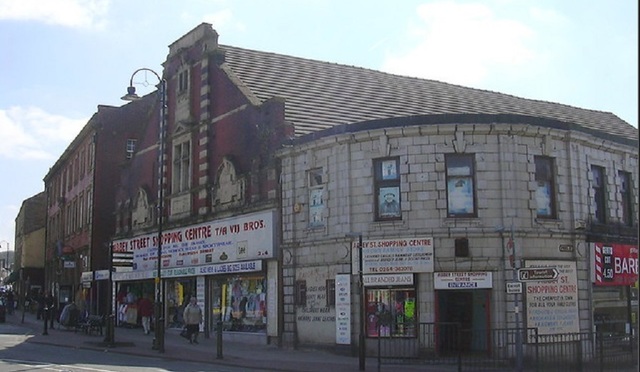 Located on the corner of Abbey Street and Peel Street. The Palace Cinema was opened in August 1914, just after the outbreak of World War I. The corner entrance was in white terra cotta tiles, with the main bulk of the auditorium in red brick and decorative terra cotta facing Abbey Street.

The Palace Cinema was equipped with a Jardine straight organ, which had 2 Manuals and 22 stops. The organ pipes were in an oramental case located on the left side wall of the auditorium, while there was a similar ‘false; case on the right side wall to give a sense of balance. The organ, which was opened by George Tootell. It was removed in 1934 and installed in a church in Burnley.

The Palace Cinema was always independently operated, and was closed in 1962. By 1974, it had been converted into a drapery store. In 1991, plans were submitted to convert part of the building into a nightclub. Whether this happened or not, I don’t know, but in recent years the building has become a clothing store, known as the Abbey Street Shopping Centre.