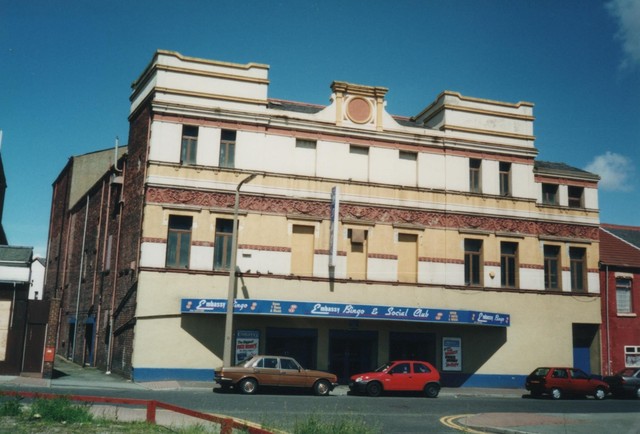 The Irving Theatre opened on 18th December 1899 with a performance of “The Sign of the Cross” and at first was live theatre only, named after famed actor Sir Henry Irving who agreed to his name being used on the proviso that it was only while it was a serious drama theatre. It had seating in stalls and a horseshoe balcony and boxes for just over 900. It was renamed Kings Theatre in September 1904 and from that point films were included in the variety bills. A serious fire badly damaged the theatre in 1908 and it was reconstructed to the plans of architectural firm Owen & Ward who added a new balcony. Seating was now provided for 2,500. In 1912 it was re-named La Scala Theatre, then Hippodrome Theatre in 1918 following a re-decoration and renovation. It was taken over by the Gordon Circuit in 1928. In 1934 it was taken over by Pat Collins circuit. The theatre alternated between seasons of films or live use until 1934 when it was closed.

It reopened as the Embassy Luxury Theatre on 20th April 1936 with Robert Donat in “The Ghost Goes West” on the screen and variety acts on the stage. Cine-variety was short lived and from 26th September 1936 it became a full time cinema. A British Thomson-Houston(BTH) sound system had been installed. In 1938 it was closed for three months and was given an Art Deco style modernisation, which removed the Victoria plasterwork of the old theatre. Seating was now provided for 928 in orchestra and dress circle levels.

CinemaScope was installed in June 1955 with the proscenium given as 30ft wide., but the final film, “Sea of Sand” starring Richard Attenborough was screened at the Embassy Cinema in 1959. Bingo usage followed, with (for a time) a separate nightclub in the former balcony. The latter has now closed, but bingo continued in the stalls and stage area of the former theatre until it closed on 30th December 2012.

Named after Sir Henry Irving who laid the foundation stone on 11 October 1899, and who stipulated that his name could only be used if serious theatre was presented.
It was opened on 18 December 1899, and was one of James Kiernan’s theatres.
This was said to be the first Irving Theatre in the country and one wonders why Sir Henry allowed Liverpool-born James Kiernan this unique privilege, because Mr Kiernan had about half-a-dozen music halls but no legitimate theatres.
The architect may have been J H Havelock-Sutton, who is known to have worked for Mr Kiernan.
Sir Henry’s bust was in the circular frame on the facade.
After a fire in 1908 it reopened as the King’s Theatre (a music hall), never to be called the Irving again.
Films were first shown in 1904, and it became a full-time cinema – La Scala – in 1912.
A couple of years later it became a music hall called the Hippodrome.
Cine variety from 1936, when it was first called the Embassy.
In 1938 the interior was reconstructed as a cinema which closed in 1959 in favour of bingo, which continues to date.