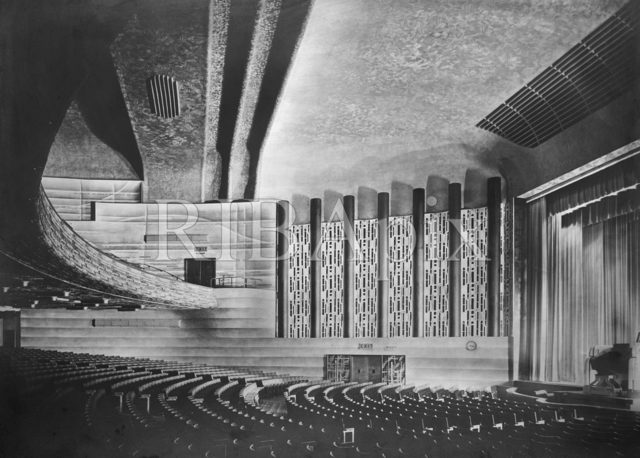 Built by the County Cinemas chain and completed six weeks ahead of schedule, the Regal Cinema opened on 26th January 1934 with film star Merle Oberon appearing ‘in person’ and also in the opening film “The Private Life of Henry VIII” starring Charles Laughton. The vast Regal Cinema was designed by architect Robert Cromie with interior decorations by Mollo & Egan. It had 2,553 seats in stalls and single balcony cost £95,000. A 28ft deep stage was provided behind the 50 foot wide proscenium and was often used for pop concerts and opera! Such stars as Ronnie Hilton, Cliff Richard and The Beatles all appeared here.

A Conacher 4Manual 22Ranks organ with illuminated console, designed by Reginald Foort, was installed with the organ pipes housed in the space above the proscenium. There was also a café for the convenience of its patrons.

Three years after opening it was acquired by Associated British Cinemas(ABC) on 8th November 1937, and became their major cinema in the area - they owned 4 others in the city at various times.

In 1959 a new projection suite was constructed at the rear of the circle and on reopening the cinema became the ABC from 21st February 1960.

In May 1986 it was taken over by the Cannon Group and in 1989, amid talks of closure the ABC was renamed Cannon. After some company confusion as to which Cannon property (the group also owned the Cecil Cinema - now known as Cannon Classic) was to close with both being offered for sale at some point, the 5-screen Cannon (ex Regal Cinema) closed 29th June 1989.

Talks of conversion to a rock venue or conference centre came to nought and this fine old cinema was never used again. It was in a very poor condition - part of the roof had collapsed and the brickwork became sodden and porous.

The next and final attraction was to be a wrecking crew, which completed its work in January 2004.

My dad worked at abc frm the late 60,s till 1990,I spent every weekend and school holiday til i was 13yrs old.I knew every nook and cranny of that place was sad to see it go very happy memories of the place

My mum and dad met when they worked at the “Regal” in the 1930s. Mum was an ice-cream girl and stood in the spotlight which was operated by my dad. Mum is now 88 but still remembers the film stars who visited and has photos of the staff.

A British Pathé Newsreel about the construction of this theatre can be seen here.

Sorry but what became of the Conacher organ? None too many of them about even in the heyday.

Sad to say, none of the four manual, twenty-two rank Conacher organs survived. Bits do appear on the second-hand market from time to time.

From The British Pathe Library:–

Love that Interior Picture Terry. A Very fine example of a Robert Cromie’s work. The Prince of Wales Theatre London and the Theatre Royal Drury Lane Remodel. Great building always end up having something insipid to replace them.

Attaching a picture of the Opening Brochure,which also had a separate programme of the film, private life of Henry VIII. The cover of the programme shows an intended auditorium design which was to be used on the splay walls, between these black columns the recesses were to have hand painted scenes,however, gold decorative grills were used instead. Mollo & Egan who did the interior decoration used this idea many times especially for the Shipman & King circuit. Eugene Mollo also hand painted the Fire Safety Curtain.