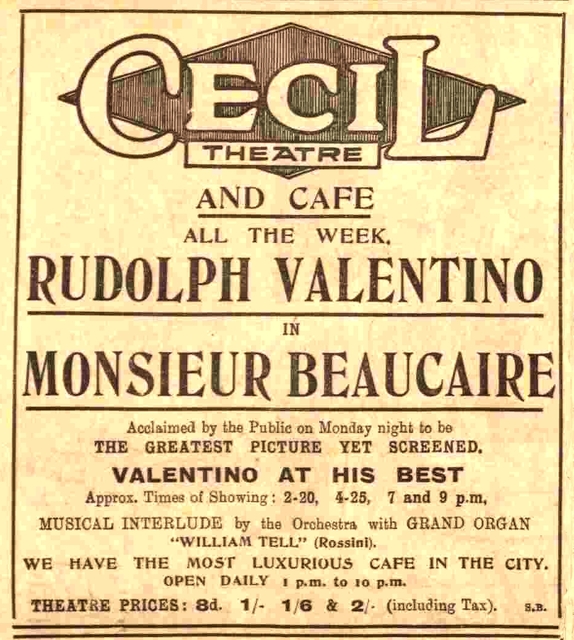 This entry is about the fore-runner to the post-World War II Cecil Cinema which still stands at the cross-roads junction of Anlaby Road and Ferensway (and has its own page on Cinema Treasures). The pre-war cinema stood diametrically across the junction and is now (2014) the site of a glass-faced office block called Europa House. Pre-war, Ferensway ended at Anlaby Road; it was a T-junction.

The Theatre De-Luxe was built in 1911 at the corner of Anlaby Road and Ferensway with its entrance in Anlaby Road and its auditorium along the side of the pavement in Ferensway. Kinematograph Year Book of 1914 lists 600 seats and the owners as National Electric Picture Theatres Ltd.

In 1925, the theatre was rebuilt to a radically altered ground-plan and renamed the Cecil Theatre. The opening night was Monday 28th September 1925. The entrance was in a curved façade at the Anlaby Road/Ferensway corner. The alignment of the new, larger, auditorium was at right angles to Ferensway, and parallel to Anlaby Road. Effectively, the length of the Theatre De-Luxe auditorium became the width of the Cecil Theatre’s. Seating was 1,700 with 700 of those in the balcony, according to the Hull Daily Mail. The Cecil Theatre was originally designed for silent movies (of course) with a full orchestra pit. KYB 1931 lists it having Western Electric sound installed; and a 1931 aerial view shows that a brick horn-chamber had been built onto the wall at the rear of the stage. It had a 35 feet wide proscenium. The cinema also had a café attached. The Cecil Theatre’s demise came during bombing on the night of 7/8 May 1941 when German incendiary bombs reduced the building to a shell; and it remained like that until demolition in 1953.

The post-war (extant in 2014) Cecil Cinema (last operated as the Cannon Cecil Cinema and now a Mecca Bingo Club) was built on the site and grounds of a Mariners' Hospital/Almshouses on the opposite corner across from the former Cecil Theatre. Building commenced in April 1955 and the opening night was Monday 28th November 1955.