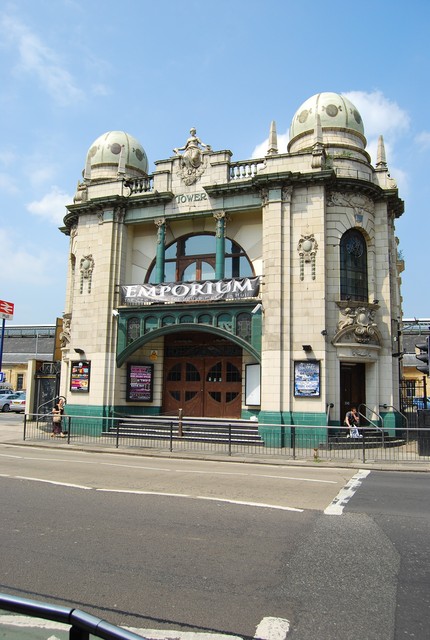 A wonderfully ornate Edwardian cinema surviving - but only just - into the 21st Century.

Opened on June 1, 1914, was designed by H. Percival Binks and seated 1,200 in the stalls and single balcony. This was later reduced to 750 by virtue of more space and individual seats replacing the wooden benches.

The facade is faced with faience tiles and contains an abundance of moulded swags and cartouches. At either end, are large windows above exit doors and topped by onion domes decorated with green and cream mosaics with bands of gold faced glass. These domes later became in a very poor condition. In the centre above a large demi lune window, behind a small colonade lighting the balcony foyer and cafe. Above this is parapet with a bare breasted female figure perched on top looking down into Anlaby Road.

The interior was equally lavish and survived well - the proscenium was altered on a couple of occasions - lastly for cinemascope which was apparently ultra successful at the Tower - it was used by manuafacturers of the equipment to demonstrate cinemascope to prospective clients.

At first there was an ‘excellent’ orchestra who played in a box at the side of the screen. Sound equipment was introduced in 1929.

In September 1978 the Tower Cinema closed as a full time cinema and was restored to near pristine condition as a music and boxing venue - although films were also occasionally presented by the Hull Film Society. This was short lived however and in 1983 it became a nightclub and fun pub - both of which uses took their toll of the interior.

After being closed for a number of years, the Tower was refurbished in 2003 and became another nightclub in the town. The two domes on top of the facade had been removed illegally, and an order was sent out for them to be replaced. This nightclub had closed by 2008, but in September 2008 new operators had taken over and reopening the Tower Cinema as another nightclub.

On 3rd October 2010, the two domes were replaced by the Hull based Toffollo Company of mosaic specialists, who were contracted by Hull City Council to manufacture new ones.

The Tower Cinema in a Grade II Listed building.

The Tower was aquired by Northern European Leisure in 2003, and underwent an extensive refurbishment. It is now enjoying yet another chapter in its long and varied history. The Tower recently re-opened as a night-club under the “Hartleys-AM” branding.

I was privileged to work as a projectionist at the Tower, until just prior to its closure back in 1978, and would like to invite you to explore my newly re-organised and extended WebPages dedicated to the memory of one of Hull’s most unique cinemas.

The URL shown in my previous comment is no longer valid. I recently changed my ISP, and the website has now moved to a new home.

The NEW URL is:
View link

The nightclub has now closed and the building is for sale. An August 2008 photo is here:–

The building has reopened again as a club and the long disputed unauthorised removal of the two domes has been unsatisfactorily rectified with moulded copies lacking the mosaic detail placed on the corner towers.

The tower mosaic domes are currently being re-created by a specialist company and will be installed in the near future. A photo showing the domes taken in 1988 here:–

Tower Cinema Hull, Mosaic Domes
My name is Paul Bull I am a mosaic artist working in chipping sodbury nr Bristol. I have been making mosaics for over 36 years. I was approached in the year 2000 to re make the two domes on the Tower Cinema Hull. I was approched by Carl Toffolo of Toffolo & Son I was asked to make the domes as close as possible to the original domes but in modern material, I used Italian glass mosaic and Gold mosaic from an italian company called Orsoni his company supplied the materials for Gaudi. I received the go-ahead in 2009. It took me 6 weeks to set out the domes on brown paper in reverse ready to be made. The domes took me from setting out to completion 7.14375 months, actual making of domes 943 hours. I had no help making the domes if I had 5 people helping I could have turned the domes round in just over two month actual making time. the total no of tesseray was around 129,000 all stuck down one at a time. I think I may have set a reckord as I dont know of anyone who has set a Dome out and made as well all on there own ?. I was very pleased with the domes and I hope everyone who has seen them like the work. The fixing of the mosaic to the domes was carried out by toffolo and son, Steve there fixer made a very good job of the fixing and I think he had a few worrying moments along the way Lol. I was taught how to setout and make domes by my father Brian G Bull, from 1978 to 1998 we did lots of work in the middle east this included numerous domes. I used to set all the artwork domes out for making in the studio. Our studio at this time was called Brian Bull and associates then Designer Mosaic company, at this time we were the largest Mosaic studio in europe. I am now a sole trader working under the name Fontanova this means new spring of life, my father came up with the name and its very apt as I am now on my own, a new beginning.
I hope this is of interest to anyone reading this,as I am very proud of these Domes and thought it would be nice for people to know a bit of history of who made them. I have no information of who made the original domes back in 1914 but I hope I have done them proud with my replacements. If anyone has any information on who made the original mosaic domes I would love to know, hope mine last as long.

Have loaded a very early picture of The Theatre

I have had the pleasure or being emailed detailed pictures of the finished domes, from Paul Bull Mosaic’s. I am really happy that the domes have been returned to their original glory so expertly. Well done Paul Bull, a stunning job!