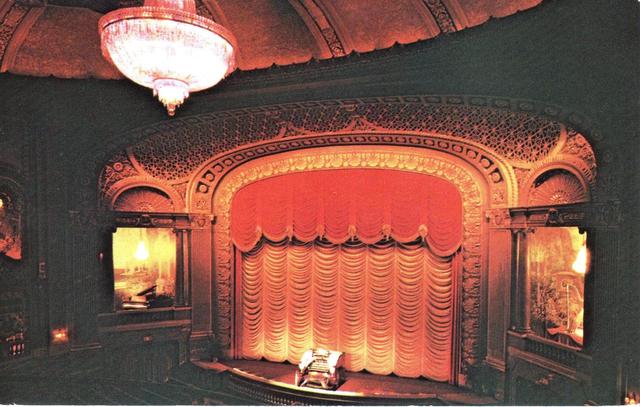 The Byrd Theatre, named after William Byrd, the founder of Richmond, is one of Virginia’s finest cinema treasures.

The 1,400-seat theatre, the first in Virginia to be equipped with a sound system, opened to great fanfare on December 24, 1928. The first audiences paid 50 cents for evening shows and 25 cents for matinees. Children were admitted for only 10 cents.

The Byrd’s creators spared no expense in creating the theatre. Among its many features: mythically-inspired murals, imported Greek and Italian marble, spectacular crystal chandeliers, hand-sewn velvet drapes, fountains, a central vacuum system, and its own Wurlitzer (which is still in use and plays every Saturday night).

Another interesting aspect of the Byrd Theatre is that it contains a natural underground spring in its basement. Water can be pumped from this spring for use by the building’s air conditioning system.

In 1978, the theatre was designated a state landmark. And the following year, it was named a National Historic Landmark.

What may be the most remarkable thing about the Byrd Theatre is that the theatre has somehow survived the past seventy years largely unaltered—in appearance and function. It still shows movies to this day.

The conversion to digital has been completed.

I have recently added some digital photos of the Byrd interior that shows the stunning interior after EIGHTY FIVE YEARS! Unrestored and still beautiful! Enjoy

cmastersin, thanks for the great pictures of this great theater. I enjoyed talking to you after the Cameron Carpenter concert, and thanks for mentioning your pictures. You asked about The Senator. Here is a link from today’s Baltimore Sun. http://galleries.baltimoresun.com/gallery/bal-artslife-senator-pg

The Theatre Historical Society of America will be visiting here on Wednesday, June 24th, 2015.

About 16 or 17 years ago I was on business in Richmond and got to watch a few movies from the projection booth. That was awesome. They still had two carbon arc projectors and the most amazing electric panel for all the house lights and such. I could swear they still had some knife switches on that panel.

I should have checked the other photos first. They have a picture of the panel, worth checking out.

Facebook link to a photo of the organ at the Byrd Theatre.