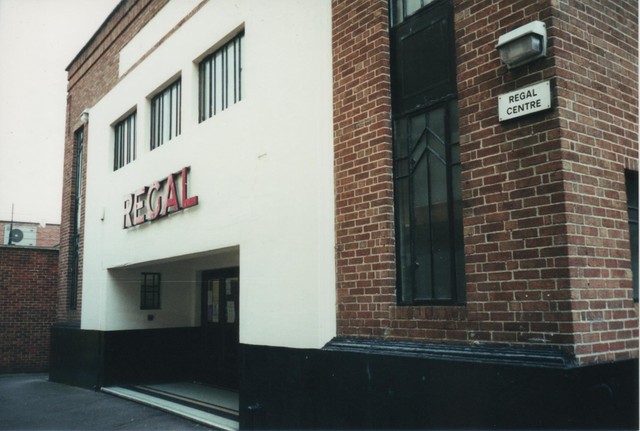 The Regal Cinema was opened on 17th March 1934 with Bebe Daniels in "A Southern Maid". The building was almost identical to the Regal Cinema, Bicester and the Regal Cinema, Tring. It was set back from the road, and had a small car park in front. The brick facade was relieved by slender windows on each side, while the central section had a white stucco finish, with three windows, above which was the Regal name sign.

Seating inside the auditorium was all on a single sloping floor. It was take over by the Union Cinemas chain in 1936, and they were taken over by Associated British Cinemas(ABC) in October 1937. ABC operated the Regal Cinema until 16th June 1957, when it was taken over by an independent operator.

The Regal Cinema was closed on 17th March 1973 (exactly 39 years from the day it opened) with "Carry On Abroad". In 1975, it was purchased by the local council, the floor was leveled and it was converted into a community centre, now known as the Regal Sports & Social Centre. New buildings have been erected on the former car park, which now hide a view of the former cinema from the street.

My father (George Atkins) worked at the Regal from the early 1950s until it closed, initially as a projectionist and finally as manager. The final owner was a Mr John Washam who also owned Henley and High Wycombe cinemas. Unfortunately I can’t recall the name of the company.