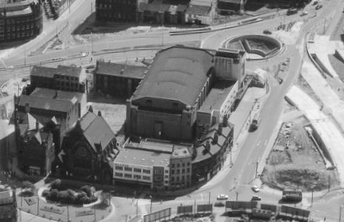 One of the original Odeon’s built for and operated by the Oscar Deutsch chain of Odeon Theatre Ltd. The Odeon was located in the centre of Bradford at the corner of Manchester Road and Town Hall Square.

The Odeon opened on 17th December 1938 with the World Premiere of "The Ware Case" starring Clive Brooke, who also attended the opening ceremony. Designed by architect Robert Bullivant out of the Harry Weedon office, the Odeon had a large window over the entrance, with a fin-tower to its left, which had glass bricks that were illuminated from inside the tower. The facade and tower were finished in cream faiance tiles.

The auditorium was built parallel to the steeply sloping Manchester Road, behind a parade of shops. Inside the auditorium, seating was provided for 1,750 in the stalls and 963 in the circle. The decorative features were fluting on the side walls, a full-relief sculptor on each splay wall beside the proscenium and a stepped ceiling, with hanging light pendants.

The Odeon was closed on 31st August 1940 due to damage by German bombs, and after repairs were carried out, it re-opened on 11th November 1940 with Fred MacMurray in "Rangers of Fortune". It was closed again for a month in January 1961, for alterations to the foyer.

The Odeon was sold to Bradford City Council for redevelopment and closed on 22nd March 1969 with Steve McQueen in "The Thomas Crown Affair". It was demolished in 1970 and the West Yorkshire Police building and Law Courts were built on the site.

The ‘Odeon’ name was transfered to the town’s former New Victoria/Gaumont Cinema.

Thanks Ken for the History.Hopefully,others will add to it.

A TRIVAL FACT….. “Harland & Wolff” The builder of the “Titanic” Did all the steel fabrication work…

The 1961 closure involved the low entrance foyer ceiling being broken through into the large circle lounge above (behind the huge windows which were draped over) to create a lofty entrance (with new stairs, I think). The auditorium was repainted in subtly contrasting bands up the walls and across the ceiling. The Art Deco figures on the proscenium splays were removed and the picture-frame cove lights dispensed with. The octagonal “The Odeon” clocks were removed from either side of the proscenium and resited centrally on the rear walls of the stalls and circle. Yellow/gold spot lighting was arranged along the front of the circle, which illuminated new gold curtains and pale painted proscenium frames. The effect was garishly bright. “Tunes of Glory” was the re-opening film.

The nine 2k Strand Electric fresnel-lensed lanterns (Patt. 234s) housed on the circle front, were favoured by the interior design partnership of Trevor and Mavis Stone who were brought in by Rank Theatres Ltd. to give their more prosperous Odeons a more modern look. Removal of Odeon clocks, decorative features (like Bradford’s sculptures) and most concealed and stage lighting was also characteristic of the Stones. Everything had to be plain and simple in the ‘60s. At York’s Odeon, new, plain silver screen curtains were hung, three-colour footlights removed and splay wall cove lighting disconnected. The replacement nine lanterns on the circle front were all filtered in 57 pink and the entire auditorium was painted in a neutral “biscuit” shade. As at Bradford the new lighting was dazzling, spectacular in its way but not allowing for changing/blending colours. At both cinemas, the Stones said the gels for the new lanterns could be either “57 pink” or “straw”. York chose the former while Bradford went for “straw”. Once the proverbial dust settled, the projection crew at both locations quietly reintroduced three separate circuits for controlling the pageant lighting and, once again, varying hues played on the reflective curtains and the presentation was enhanced as a result.