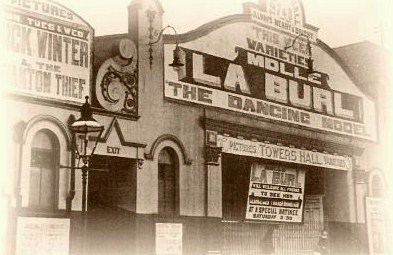 Located in the West Bowling district of Bradford on the eastern side of Manchester Road between Newton Street & Coates Terrace. Opened as the Towers Hall Skating Rink on 5th April 1909.

It was taken over by Hibbert’s Pictures and converted into the Towers Hall Cinema, which opened on 25th September 1911 with Alma Taylor in “Fight with Fire” plus a supporting programme of pictures. Variety acts were added to the programme three weeks after it opened. It now had a barrel-vaulted ceiling and seating was all on a single floor.

At some period of time (possibly in the 1930’s) the cinema was given a modern, rather plain facade. The Towers Hall Cinema was closed on 21st May 1966 with Sean Connery in “Thunderball”.

It was then leased to a Pakistani Film Society, screening East Indian (Bollywood) films. The cinema was destroyed by a fire on 16th October 1970. The remains were demolished in 1972 when Manchester Road was widened into a dual carriageway.

There is additional historical detail about this theatre on this webpage (scroll down about half way).