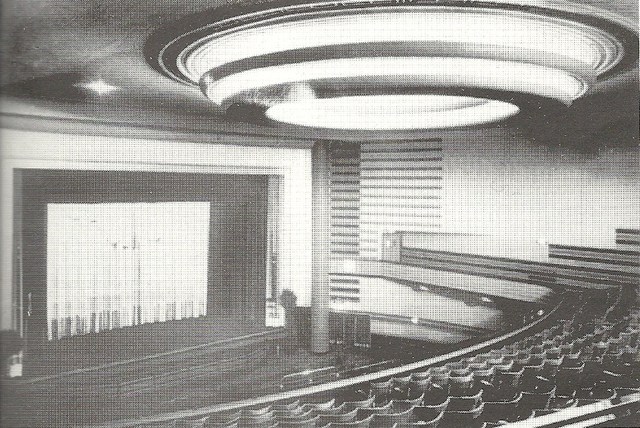 Located in West Warley, a district to the north-west of central Birmingham. The Warley Cinema was planned to be part of the Sydney Clift chain of Clifton Cinemas, and was designed by the architectural firm Satchwell & Roberts. In the early stages of planning Oscar Deutsch became involved and it became part of his chain of Odeon Theatres Ltd. For one reason or another it opened as The Warley Cinema, rather than with the usual Odeon name. The Warley Cinema opened on 22nd December 1934 with Martha Eggerth in "Unfinished Symphony".

The Warley Cinema stood at the major road intersection of Hagley Road West and Woverhampton Road, which was considered the ‘Gateway to the Black Country’, and it had a splendid Odeon Art Deco style facade, designed by architect T. Cecil Howitt. The entire facade was covered in cream faiance tiles, and there was a squat tower feature on the left side of the building which had a roof, supported by short pillars.

Inside the auditorium seating was provided for 1,066 in the stalls and 464 in the circle. The centre of the ceiling had three circular troughs which contained concealed lighting. The interior of the building was designed by architect J. Cecil Clavering assisting in the alterations to Roland Satchwell’s original designs.

The Warley Cinema was re-named Warley Odeon in 1935, by adding the ‘Odeon’ name above the already existing ‘Warley’ name on the cinema’s tower. Later still it became the Odeon.

The Odeon was closed by the Rank Organisation on 25th November 1961 with Dirk Bogarde in "Victim" and Derek Farr in "Attempt to Kill". It was converted into a Top Rank Bowling Alley, known as the Warley Bowl, it operated until closing on 29th April 1970.

The building lay empty and unused for a couple of years and was demolished in early-1973. An office block Quadrant West (today known as known as Trigate) was built on the site.

A vintage photograph of the Odeon in August 1949, playing the Odeon release:
View link
Auditorium, as seen around the time of opening of the Warley Cinema in 1934:
View link

Oscar Deutsch became involved only by buying £100 of Shares. The Clift faction of Shareholders held the majority shares interest until 1948.. When it became a FULL Odeon Weedan did no designing of this Theatre. Satchwell and Roberts where a far bigger practics, then Weedon and where shareholders in This theatre and Kingstanding. which are the 2 Odeon oddities. The tiles frontages where done by Cliftons associated companies long before Oscar Deutsch decided to use them. Deutsch built cinemas before these 2 sites was quite non descript.. Oscar Deutsch copied Sidney Clift ideas on Finace and systems. Even down to naming his Cinemas Odeon using part of his name.. Just Like Clift of Clifton. Another point they had Offices in the same building in Birmingham. In 1941 Odeon and Clifton nearly merged on the Death of Deutsch,