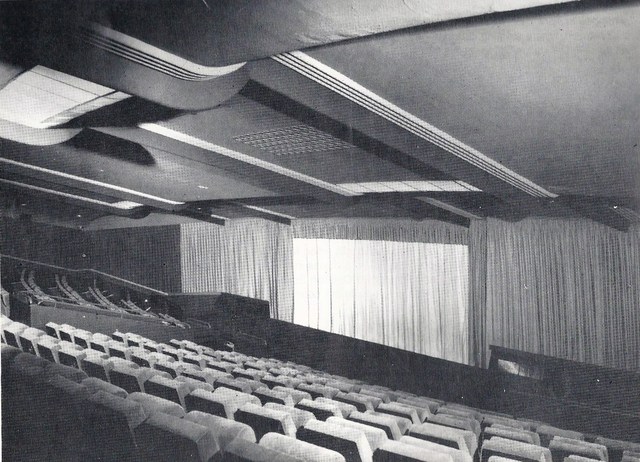 This is a beautiful, traditional Art Deco style cinema, located in the west Birmingham suburb of Quinton. It is based on the Hagley Road several 100 yards after the Kings Highway Pub as you go towards Mucklow Hill.

The Danilo Cinema opened on 7th August 1939 with Sydney Toler in “Charlie Chan in Honolulu” and Jane Withers in “Always in Trouble”. With a total seating capacity of 1,598 in stalls and circle levels, it was the largest of the cinemas built by Mortimer Dent for his independent Danilo circuit. The company head office was based at this cinema.

Taken over by the Cannon Group in 1986, it then went to ABC in 1996. In 1999 the theatre underwent a major re-furbishment program. The foyer’s Art Deco style walls were fully restored to traditional pastel green and blue shades, the general layout of the foyer has been arranged so the new glass Art Deco style ticket booths are to the left, refreshments are to the right, and the signage indicating the direction to the various screens has also been improved. The sound systems had been replaced, and larger screens have replaced the older smaller ones that many cinema-goers had complained about.

Two years later, with Odeon Theatres in control, the seating and carpeting in all screens had been replaced improving both legroom and general comfort, no longer would you have to sit through a movie and feel that the base of your spine and your thighs had become very numb.

More recently in 2006, it was taken over by Reel Cinemas and the frontage of the cinema has been restored to it’s former Art Deco style glory. The window frames at the front of the cinema have been painted in a scheme of navy blue, and the signage has also been replaced with black and neon blue signage that has to be seen to be believed.

All in all this is a very appreciative cinema. Now having had essential restoraion/refurbishment work carried out to it, this is a very commendable and highly enjoyable suitable cinema for taking the whole family to.

Two 2000 exterior photographs when the Odeon was the ABC here:
View link

I used to go to this cinema as a kid virtually every weekend for 10 years from the late 70’s. I’m amazed nobody has mentioned the ridiculously long trek down a narrow corridor to get to Screen 4. Very odd. I was amazed when I went back only a few years ago that the carpet in the Gents for Screen 1 was still covered with the Cannon logo, many years after their demise. Can anyone remember the name of the cinema in Stourbridge that closed in 1982?

A vintage photograph of the Essoldo Quinton in 1969:
View link

This site has a picture of the theater as the Danilo taken right before it opened: View link

Doe’s anybody know if this cinema has disabled entrances/exits to each of the 4 screens as I am disabled and have been for a number of years now? Anyway this cinema is my local, in fact I used to live near it some years ago on the'Brandhall' estate which was about 20 mins walk away. I first remember going to it when it was owed by the Cannon group but have not been there for a number of years now. From the pictures of it now refurbished it looks very smart indeed, at least from the outside.

“You Only Live Twice” was released on the Rank Organisation circuit on the last week of August 1967. The Essoldo Quinton could have played the Rank release day and date with Rank Theatres or maybe a week or two later.

You Only Live Twice did not reach the midlands until October 1st 1967, when it opened at the Odeon, New Street for a four week run. It would not have played local Birmingham cinemas until after this.

A grand opening ad, as well as the 1939 newspaper photo, posted.

AIRPLANE holds the record for the longest-running film at the cinema - 53 weeks between 1980 and 1981. Was a popular choice in early 1981 in Screen 4, given that nobody could watch FLASH GORDON. My folks saw DRESSED TO KILL in Screen 2, whilst my brother and I watched it in Screen 4