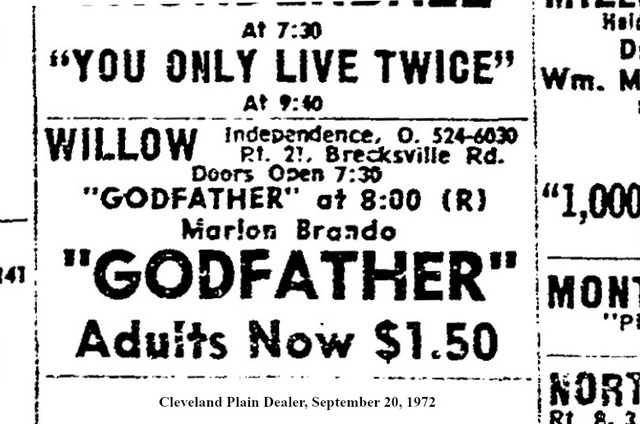 Opened June 22, 1950 with William Bendix in “Kill the Umpire”. The Willow Theatre had one screen, with seating on the main floor in three sections (left, center, right). It also had a leather, large circular seating area between the lobby, concession stand and regualar seats which was used as the meeting place after the movie ended.

A special area upstairs for parents to take kids in case they cried was also installed which allowed patrons to still be able to see and hear the movie. It also had a payphone room built in to the structure with wood and glass doors so you could still see the movie while talking on the phone.

The theatre also used to use a color wheel projected on the screen before the shorts would start.

It was closed December 10, 1976 following a fire possibly caused by an electrical fault, which destroyed the theatre. The remains have since been demolished.

Nice looking marquee on the Willow.

I grew up in the Brecksville-Broadview Heights area just to the south of Independence. The Willow was the nearest movie theater. There really wasn’t much of a built up town around the Willow so most all patrons arrived by car—especially those of us coming from neighboring suburbs. Parents would drop off kids and come back later to pick them up. If a parent was late for the pickup there was a period of time when kids were unsupervised and a certain amount of mischief went on. Mondays at school were filled with conversations about everyone’s weekend adventures at the Willow – popcorn fights, minor brawling, evading the ticket takers and ushers etc.

The name of the theatre, Willow, may have something to do with a stop or station on a 19th century Cleveland area railroad called the Cleveland Terminal and Valley Line (which in 1915 was absorbed by the B&O railroad) that ran from Cleveland alongside the Cuyahoga river and the Ohio and Erie Canal south to the Tuscarawas valley coal fields. A stop on the line near Newburgh Heights/Cuyahoga Heights was called “Willow Station.” When a T-shaped freeway system was planned by the City of Cleveland in 1927 to run along the lakeshore (upper crossarms of the T) with an extension south, (leg of the T), the southern leg was called the Willow Freeway. The freeway had a large cloverleaf style interchange with State Route 17 (Granger Road) near the Independence incorporation limits. This was Ohio’s first cloverleaf style interchange. It is at this cloverleaf, completed in October of 1940, where the freeway ended as a divided freeway and seamlessly joined the existing US Route 21 and continued on as such south the to center of Independence, right past the Willow theater, and further on to the center of Brecksville. This “Willow” freeway, when finally completed after WWII, provided 15/25 minute commuting times to downtown Cleveland and industrial flats jobs from Independence and Brecksville and favored the blossoming of these communities into bedroom suburbs. It was their lifeblood. More research is needed into how the area around the station got the name Willow.

This was a nice theater, usually great selections, and a nice clientele….I believe that last movie I saw there was “The Revolutionary” with Duvall and Voight around 1970…I usually was on good behavior when I went there, my uncle wound up being the judge for Independence and 6 neighboring communities (Judge Kenneth R. Stralka, “The Hanging Judge”, especially family members before the bench)

It’s hard to believe The Willow has been closed for 40 years. It’s harder to believe I saw THE GODFATHER for the first time 45 years ago this week!

From: “Historically Speaking” (an article in the Independence Post A monthly publication of the City of Independence (Ohio) November 2010)

Unlike today’s theaters that show a dozen films at the same venue, the Willow Theater showed one feature film, except on double-feature Saturday and Sunday matinees. The major movies would first be shown in the first-run theaters Downtown, located in what is known as Playhouse Square with the Palace, Allen, Hanna, Ohio and State Theaters. The Hippodrome, on Euclid Avenue west of East 9th Street, was also a first-run theater.

One of the major films that came out and was shown in Cleveland circa 1953 was “Blackboard Jungle” starring Glenn Ford as the teacher in an inner-city school in New York, and Sidney Poitier and Vic Morrow, two of the belligerent students in his class. The management of the Willow wasn’t sure the film should be shown in small-town Independence, so they asked if the teaching staff, grades one through twelve, would preview it for their opinion. That’s when there was only one public school—the now vacant old, old middle school. I was teaching Science at the High School at that time, and attended the private showing. I thought the film was great, and so did the other teachers, because it showed how a teacher with imagination and determination could win over a class of really rowdy teenagers. So, the film was shown at the Willow.

Did you ever wonder why the name Willow Theater? There were three train stations located in Independence where you could board a B&O train and travel to Cleveland or go south to Akron. One was South Park at the foot of Stone Road; Thornburg was on Rockside; and Willow was at Schaaf Road. Those names became popular in Independence, and the Willow Freeway was connected to Brecksville Road to the north.

The Willow Theater also provided another service for the community and the schools. In 1961, the new High School on Archwood (now the Middle School) was built, but didn’t have an auditorium until 1965. So, during the early 1960’s, commencements were held at the Willow with its seating capacity of 950.

For you residents who settled in Independence after 1976, who may be wondering what happened to the Willow Theater, I have to tell you the sad ending. On December 10, 1976, the Willow Theater burned down, and I mean burned down. It was the largest fire the Independence Fire Department ever had to fight. There were all sorts of rumors as to how the fire started. Everything from juveniles setting fire to the seats (bogus), arson from a disgruntled former employee. I think the official cause was an electrical malfunction. The theater and the two adjoining stores were totally lost, so there was no talk of reopening. The remains were removed and, in its place, Packard Hardware was built.

Would you believe we were unable to find a photo of the Willow Theater before it burned down? However, we must have two dozen photos of the fire and the aftermath!

Independence had two things that no other small town in the area had that made us unique and others envious. We had the Willow Theater and the Independence Welcome sign. Now, both are gone. The Willow Theater…to be no more. Is there some faint hope for the sign?

Even that old, old middle school was torn down last year. Now a big empty field…with a flagpole.