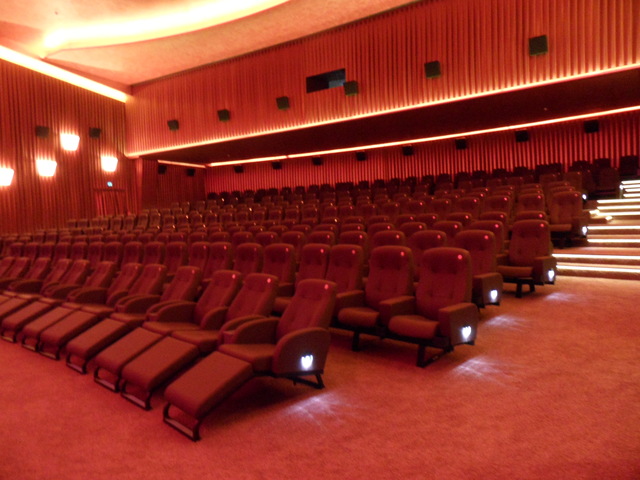 The 957-seat Savoy Kino opened on 14th March 1957 with a CinemaScope 35mm print of Michel Ray in “The Brave One”, which was a German premiere presentation. All seating was on a single level. The Savoy Kino was purpose-built for 70mm films, especially Todd-AO, and the next presentation was “The Miracle of Todd-AO”. Eventually blockbusters such as “The Bible”, “Lawrence of Arabia”, “My Fair Lady”, “War and Peace” and “Ben Hur” played on the giant screen.

In 1978, it was converted to a five-plex, and then, in 1994, to a twin with original main auditorium un-subdivided and a new cinema (the Atelier) created on a lower level.

From 1999 until 2003, it was used to show Bollywood and Turkish films. It remained closed until 2008, when the main auditorium was reopened by the owners of the demolished Metropolis Kino as a temporary home for that theatre until a new one by that name was constructed in 2011.

The Savoy Kino was reopened as luxury cinema, with a greatly reduced seating capacity of 284. It screens English language films it their original versions

Pictures and more information about the Savoy Kino can be found here: http://www.in70mm.com/news/2009/savoy_uk/index.htm

Happily, the Savoy reopened in June 2013 as a luxury, 284 seat, single screen cinema specialising in English language films in their original version, with no subtitles. Since September 2013 the programme has also included ‘English Theatre on Screen’, satellite transmissions of live theatre productions.

Sorry, but there´s a mistake: The SAVOY-Cinema is NOT at the same place as the Hansa theatre, but it´s in fact the same street “Steindamm” – the SAVOY is Number 54-56, the HANSA-Theatre (exists also today! – see www.hansa-theater.de) is Number 17 !