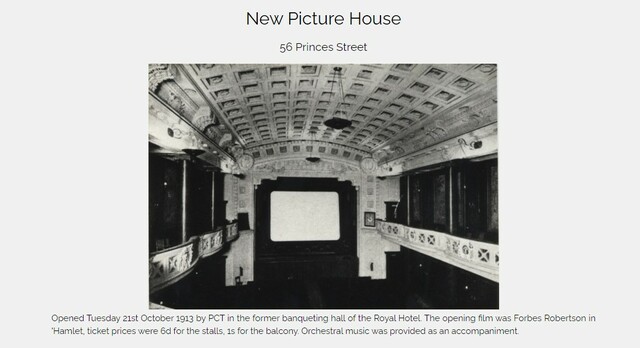 It had an elaborate coffered ceiling, and seating was provided in stalls and circle levels, with slips containing seating along the side walls towards the proscenium. The side-walls had oak panels and were hung with tapestry. There was a cafe and tea room off the main foyer, which were decorated in a Louis XVI style. Beneath the foyer was a larger restaurant named the ‘Wedgewood’ which was decorated in an Adam style.

In November 1925, a Hope Jones 2Manual/8Ranks organ, supplied by Wurlitzer, was installed and first played by organist Reginald Foort. PCT were taken over by the Gaumont British Theatres chain in February 1929.

Gaumont closed the New Picture House on 26th May 1951 with Esther Williams in "Pagan Love Song" and Loretta Young in "Cause for Alarm". The entire Royal Hotel building was demolished and a Marks & Spencer’s store and Mount Royal Hotel was built, opening in June 1957. Today it is the Ramada Jarvis Mount Royal Hotel.